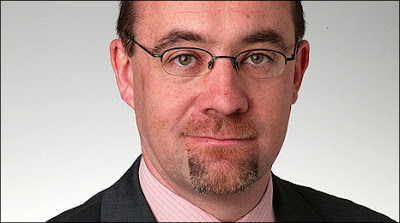 Jim Knight is on Question Time tonight. Here's his BBC publicity shot. Beard looks a bit weird, doesn't it? This clown is the Labour MP for Dorset South and minister for something-or-other (employment) who's a serial trougher who said his exorbitant second home and expenses claims were 'reasonable'. This is how his own local rag, the Dorset Echo, reported it at the time:

Mr Knight claimed £12,541.69 in mortgage interest payments last year for a one-bedroom flat in Vauxhall that he has owned for more than two years. He also claimed £3,395 for food and £2,290.85 for maintenance as well as sums to cover telephone bills, cleaning services and utility and Council Tax payments. His total additional cost allowance claim came to just over £21,363 last year – the maximum allowance being £23,083. Mr Knight said he is in favour of a total overhaul of the way in which MPs’ salaries and expenses are set, adding that members should have no say at all in what they earn. He said: “It’s important to be transparent and I decided, pro-actively, to publish my expenses.

Maybe so, but this asshole's just said on Question Time that he doesn't think he should have to pay any of this cash back and that Cameron is an 'opportunist' for forcing his MPs to do it. He doesn't seem to be getting much sympathy from the audience, one of whom, rightly, said that until there are prosecutions, no restoration of trust is possible.