They Know How You Vote 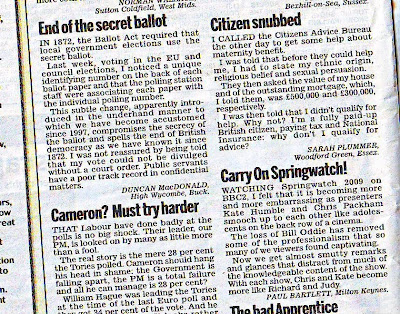 "They" meaning this government (naturally) who, for some reason, quietly decided to end secret ballots at some time during its tenure between 1997 and now. Established by Gladstone in the Secret Ballot Act, 1872, (and reinforced with the Corrupt and Illegal Practices Act of 1883) it goes without saying that the motivation for the legislation was to solve the problem of intimidation or bribing of voters and/or to ensure that no data could be gathered about individuals' voting choices within constituencies by central government, guaranteeing any vote is genuinely free.

But a letter to the Mail today pointed-out to me by a family member casts serious and shocking doubt on whether that guarantee is still in force. A member of the public in High Wycombe (a town very near my childhood stomping ground, incidentally but irrelevantly) brought to our attention that ballot papers for the recent local and EU elections were each identifiable by a unique number which was then ticked-off against the voters' individual polling cards by an official. I have to admit, I didn't even notice this when I voted last week but apparently it is now national practice. Previously, there was no way polling cards and ballot papers could be connected whatsoever - the vote you cast was anonymous because ballot papers were identical with no distinguishing marks. Why is that not the case now? Why should the government know (or even want to know) the names and addresses of the people who vote for them, or, more sinister, of their political opponents? Not so long ago, this was illegal.

The letter-writer makes the point about this fresh assault on our fundamental liberties quite well:

This subtle change, apparently introduced in the underhand manner to which we have become accustomed since 1997, compromises the secrecy of the ballot and spells the end of British democracy as we have known it since 1872. I was not reassured by being told that my vote could not be divulged without a court order. Public servants have a poor track record in confidential matters.

This is, of course, true - there is ample evidence to support the view that the government cannot be trusted with extremely sensitive information. But that's not really the point of principle. The point of principle is that no official, elected or otherwise, should possess or have access to the private, secret vote cast by individual members of the electorate. That there could be a database of such information is truly chilling. It suggests we have not had a secret ballot possibly for years in this country and that your government quite possibly now knows how you vote. Today, there is no such thing in Britain as the secret ballot. Labour has compromised the very soul of British democracy: the free vote.

I didn't know anything about this. Perhaps you did. If so, forgive my ignorance. But if this was known widely and I somehow missed it, then why aren't people up in arms? Where are the protests? My suspicion is that hardly anybody realises just how compromised liberty and democracy have become in Britain since Labour took power. Now we have an unelected Prime Minister clinging on to office without a popular mandate surrounded by unelected peers parachuted into government, lawmaking without legitimacy. We have de 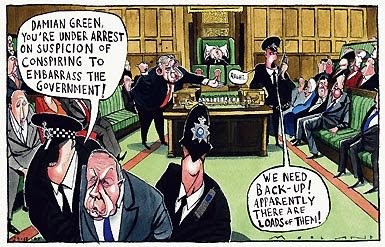 manded the general election - God knows, I have enough times here - but now we can't even guarantee it wouldn't be rigged even if those demands had not fallen on deaf ears. How? Well, if they have information on a database about who voted which way in previous elections, in a general election in, say, key marginals (which means just about every Labour seat now) how hard can it be to delay the posting of polling cards to what are deemed 'anti-Labour' households, for instance?

I know, I know: paranoid! Well, I'm not suggesting a desperate Labour party led by what amounts now to little more than a demagogic tyrant and faced with the prospect of total wipeout in the next election would resort to such banana republic measures. No, really, I'm almost convinced they wouldn't.

All I am saying, and this is the key difference between 'Before Labour' and 'Since Labour', is that if they really wanted to, now they could.

(If anyone has any more information about the piece of Labour legislation that ended the secret ballot in Britain, I'd be grateful to hear about it.)

Update:
Interesting exchange recorded on Freedom of Information helpsite WhatDoTheyKnow.com. The key part for me was this reply from the Electoral Commission about vote tracing:

Thank you for your query,

By vote tracing I take it that you mean occasions where a ballot paper
cast at an election has been traced back to the elector who is supposed
to have marked that ballot paper. This can only occur on the order of a
court.

There is no central database of such applications or cases however we
are aware of some cases where this has occurred.

Two of these related to election petitions that have involved the
scrutiny of ballot papers by the Court in camera where electoral
malpractice is alleged to see who the allegedly fraudulent votes were
cast for. We are aware that it was done in the Slough 2007 election
petition as it allowed the court to show that fraudulently registered
voters had cast their vote for one particular candidate. We are also
aware that it was done following the local elections in Birmingham in
2004 where postal votes that had been fraudulently applied for or
completed were checked to the same effect. The third case was where West
Midlands Police obtained the necessary court order following a failed
election petition relating to the 2007 local elections in Coventry. One
person was subsequently convicted of two cases of Personation at two
separate polling stations.

In other words, the Electoral Commission only knows about a couple of cases of vote tracing taking place for whatever reason, and these both happened in the last five years. Curiouser and curiouser. It's 'unaware' of any others because there is 'no central database' (ie: no central file) of occasions when these (new?) powers have been used. The whole letter implies, however, that it is possible to trace any voters from 'their' ballot papers, which is outrageous given this government's record on security and its abuses of anti-terrorist legislation etc. This kind-of confirms my previous point: if Labour wanted to shaft Britain in a general election, they definitely could.

Still no joy on the new law which over-rode the Secret Ballot Act, 1872 and permitted this parlous state of affairs to emerge. Anyone know anything about it? Guess I'll have to keep looking...

Update 2:
The Electoral Commission's advisory document for the design of ballot papers in 2003 makes for very curious reading on the subject of vote tracing. For instance (and sorry it's such a long quote):

4.5 The human rights organisation Liberty has argued
that the use of serial numbers or any mark whereby
vote-tracing can take place after an election should
be stopped. They also point out that other countries
manage their elections without the use of vote-tracing
mechanisms. Liberty’s concerns are based on the fear
that some voters have that security services can trace
their votes; they acknowledge that while the fear may
be unjustified it is an understandable one. Liberty also
recognises that a consequence of the discontinuation
of the vote-tracing provisions would be the need to
re-run an election where personation was proved
where the number of personated votes was greater
than the winning candidate’s majority. However,
Liberty argues that this happens extremely rarely.
4.6 Liberty takes the view that vote-tracing does not help
to deal with allegations of personation, rather it merely
enables the result to be corrected afterwards if personation
is proved and that the discontinuation of vote-tracing would
make no difference to the prevention, detection or proof of
offences of personation. In its opinion, a real safeguard
against personation would be to require voters to provide
some proof of identity when they go to vote and Liberty
has expressed its support in principle for such a measure.
4.7 The Commission acknowledges the concerns that
underpin the case put forward by Liberty and others
against the use of serial numbers. However, we also
recognise the arguments that vote-tracing can prove, and
has proved, a valuable instrument in tackling electoral
fraud. We believe there have been six cases where vote
tracing has been ordered by the courts in the last 10
years. The key judgement is whether the benefits drawn
from the ability of the courts to trace a vote outweigh any
possible concerns held by some electors that security
services may be seeking to identify individual voters’ ballot
papers to ascertain for whom they have voted. In making
this judgement, we also recognise the wider issues of
principle about the use of serial numbers (or any other
mechanism). Many international observers of UK election
practice are astonished at the use of a mechanism
designed to allow – even in controlled circumstances –
for a link to be made between a vote and an individual.
These issues need to be considered in relation to both
traditional voting processes and the new electronic
voting methods being tested through pilot schemes.
The Commission will consider separately the wider issue
of whether providing for the possibility of vote tracing in
the event of allegations of fraud is a necessary feature
of our electoral system, given the anxieties of some
voters over the possible misuse of serial numbers to
trace their vote.
4.8 As long as the present system continues, it is clearly
important that polling station staff are able to explain to
any concerned voters how the serial numbers are used,
and the exceptional circumstances in which any link
might be made between the ballot paper issued...

Fine. So here we have a mystery about "six instances of vote tracing" between 1993 and 2003. The Commission apparently declined to comment on the 'six instances'. They haven't a clue about them, in other words, presumably because cases specifically where serial numbers were used to trace votes didn't exist before 2003. Why? Because serial numbers, as my mother (who's voted for 40 years too, anon in the comments) quite clearly recalls, were not in use. She also remembers, as she says in her email to me "saying to your father in 2005 after voting in the general election that there were numbers on the ballot papers. There were never any numbers on them before, so far as I remember."
Posted by Jon Lishman at 6/09/2009 04:04:00 pm