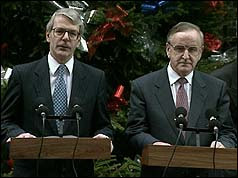 Brown cited the Disability Discrimination Act (1995) as a Labour success in his shockingly awful conference speech. But, as a commenter in the Guardian has pointed out:

Did I hear right in the speech. Did his list of Labour successes include the Disability Discrimination Act? I am fairly sure that Act was a private members bill passed in 1995. As with all such bills, it required government sympathy - that would be the Tory government...

I think they assume that all progressive legislation must be Labour. So much so that they don't even check the facts.

Exactly. It was a cross party bill, not some sort of 'evidence' of Labour's moral superiority and 'progressive' credentials. It's just hideous this bilious, vile, tribal hatred of the Tories just for the sake of it. It's utterly corrosive, anti-democratic and contemptuous of the pluralist ideals this country was built on. But claiming credit where it is not deserved and flies in the face of easily checked facts! I'm sorry, but that's either pathological, desperate - or both.

Combine this with the wicked untruth Brown uttered in the same speech that Blair (Blair?) began the Northern Ireland Peace Process. Er, no. It was John Major in one of his greatest successes as (elected) Prime Minister, won in the face of stiff opposition from his own party, with the Downing Street Declaration of '93, the negotiation of the first IRA ceasfire in '94 and the subsequent Good Friday Agreement of 1998, in which he played a - or even 'the' - crucial role, who actually "answered" the Irish Question. In fact, I strongly recall thinking at the time that a still very much wet behind the ears Blair seemed to be muscling in on what was, in fact, Major's final triumph.

But in the end, that all will be for history to decide, (not Labour - and certainly not Brown!). I think you can see a pattern forming, though, can't you? This particularly sordid piece of Tory-hating Labour revisionism isn't all Brown, of course. It started with Blair during his farewell tour in 2007 (remember that assault on our senses!) in his long search for some sort of historical "legacy". Northern Ireland is Major's legacy, not Blair's - and certainly not Labour's! But Brown's complete omission of Major, the architect of the Peace Process, from history in his speech spoke volumes about the man's extraordinary capacity for deceit, among many other things. It's all the more hypocritical for a man who pretends to be a historian.

The point is that the unravelling of this utterly moribund, dishonest, conference speech is already gathering pace, just a few hours after it was made. And so is the final end of Brown. He is as contemptuous of the the political process and true democracy in Britain as he is deluded about his own significance in the long history of this country. Fifty years from now he will be a footnote tacked on to the end of Blair's premiership - if he's lucky. A bit like Alec Douglas-Home (although I'm uncomfortable comparing a decent, honourable, honest party leader like Douglas-Home with a viciously ambitious abuser like Brown) after Macmillan.

He's very, very close to that rude awakening millions of right-minded, decent (and yes, "hard working") people that disagree with him, and whom he therefore despises so much, have been looking forward to for so long. Well, it's been a costly wait in so many ways. But his downfall, quite possibly, will be Britain's salvation and therefore worth that wait.

(PS: Something once said, with typical modesty, by Alec Douglas-Home seems to me to be more applicable to Gordon Brown than to himself.

“There are two problems in my life. The political ones are insoluble and the economic ones are incomprehensible”