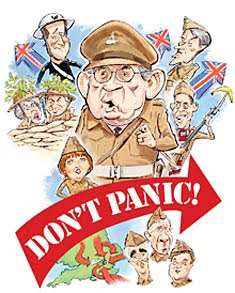 I remember that, during the Thatcher/Major years, what you might call 'attack satire' - aggressive, abusive, left wing, activist, 'alternative' comedy from a list of people most of whom are more-or-less household names these days - was ubiquitous. Ben Elton is one name that springs to mind. Alexi Sale another. But there was a whole crop of them, all either intellectual, Oxbridge lefty luvvies (Stephen Fry) or self-styled (fake, in other words) working class, Comedy Store stand-up types who made long, enduring careers out of "bashing Thatcher" (Ben Elton). The media, of course, and in particular the BBC, didn't just go along with it, but recruited, encouraged and financed the 'talent' that would be spouting it until the Tories were finally banished. No surprise there, then.

I suppose it was a kind of tribute to her, in a backhanded sort of way, that she cheesed them all off so royally in her mission to turn this country from a post-colonial, failed socialist backwater into a nation that championed genuine aspiration and indivuality and made a virtue out of wealth-creation and private ownership.(Unfortunately, given the hopeless mess we are in today, she clearly didn't go far enough - but that's another story.) She also shrugged them off - and probably benefited from the kind of image they created of her.

I laughed heartily enough with everyone else at the time, thinking that, with charming youthful naivete, that it was all harmless enough and generally pretty funny. Then along came Major and the attacks evolved into something quite different - and more effective. Instead of being part of some sort of satirical public debate about the direction of the country - with the reds on one side and the 'evil Tories' on the other - all of a sudden you had pure ridicule, day after day after day. Major was a figure of fun, not anger, and not so much because of what he did (in the end, he wasn't such a terrible prime minister), but because of who he was, rightly or wrongly (wrongly). Deep down, people didn't really think he was up to the job, that he lacked charisma and, though nice, was weak. Again, that assessment of him was entirely wrong, but it stuck and the left, in an endless, personalised propaganda campaign, made sure of it. Part of that process of character assassination was the 'satire' of the day which, again, was pretty widespread. It was just one part of the Blair/Mandelson/Campbell plan - a plan that was totally successful, if '97 is anything to go by.

But now we have a prime minister and a government who, in every possible sense, are worse than John Major and his, and so we are forced to ask a question: Where the hell is the satire? There is no equivalent of, say, Spitting Image, savaging Brown and his hapless crew, nourished by a seemingly endless supply of material (I know, I know - they did try a relaunch, but it failed the ratings test horribly - and understandably, given that it was completely limp). I realise there's some political satire about, in Private Eye and so forth, and with the broadsheet cartoonists, but nothing like on the scale of the 'golden age' of the late-60s to the mid-90s.

I suppose there are a number of possible reasons for this. I'll list a couple of them:
Me? Well, straw men notwithstanding, I think it's a combination of all five, with some extra factors that I've failed to spot thrown into the mix. I have no doubt that number three on the list will be controversial to some, but the evidence is there for all to see. Brown is never attacked by, say, morons like Marcus Brigstocke or Mark Steel - and with good reason, since Steel, for instance, inhabits a political realm which lies just to the left of Trotsky. But they get vast amounts of exposure on the BBC, especially the scrofulous Brigstocke. Talk about biased. But that's the point, it is biased because, apart from the centre-right attack blogs that have sprung up over the past few years, (and with great success, so clearly there was a gap in the market), there is nothing else - there's no such thing as 'mainstream conservative political satire'.

At least, that's what I thought until I read this earlier in the Telegraph. Melissa Kite no less, a serious political commentator (and a jolly good one), has decided to try her hand. Here's a taste:

"Right!," said Captain Gordon Mainwaring, tapping his baton on the table. “I’m calling to order this emergency crisis meeting of Cobra here in Cabinet Office Briefing Room A. Are you paying attention, Milipike?”

But, Private Milipike had a glazed expression. He was dreaming about the time when he would take over the Labour Defence Volunteers and run the Downing Street platoon as it was meant to be run, with bowls of bananas on every desk and weekly gurning competitions.

Sergeant Harperson stepped forward with a click of her designer heels. “Attention! You band of snivelling twerps. You’re useless, the lot of you. I bet you’ve no idea what I’ve had to do this morning? I ironed three shirts while I was on the Today programme…”

“Er, that’ll do Harperson, I think I’d better take it from here. We are currently negotiating an international treaty on salt distribution, lads, so we are better equipped to fight the war on snow.

“Snow has no place in a civilised society. And it is this Labour government that is working to end the age old injustice of snowfall and the deeply unfair practise of ice forming on pavements…”

Milipike’s brother, Private Ed, who was an expert on weather, piped up: “Except in Antarctica, Mr Mainwaring, sir.”