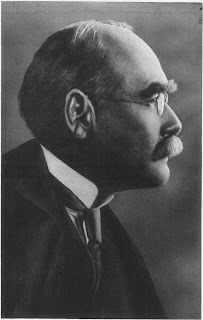 Someone quoted Kipling with reference to Afghanistan in yesterday's Telegraph - and very aptly - though I can't be certain: I generally can't remember that far back these days. But it put me in mind of "Tommy", his wonderful satirical poem about the lot of the average squaddie, who, when called upon to execute the policy follies of men like Tony Blair, is treated with hypocritical reverence and, should he lose his life in the service of Queen and Country, can expect his memory to be honoured, for instance, with a cursory, solemn mention at the dispatch box - but not a visit from Gordon at his repatriation ceremony, of course. The rest of the time, he's ignored, underpaid, under-equipped, unappreciated, badly billeted and generally despised - especially by the people who would put him in harm's way just to suit their own political ambitions and vanities (Blair again).

The point is that the poem is as fresh now as it was when it was penned by the great man, in 1890. It's pretty funny, too:

You talk o' better food for us, an' schools, an' fires, an' all:
We'll wait for extry rations if you treat us rational.
Don't mess about the cook-room slops, but prove it to our face
The Widow's Uniform is not the soldier-man's disgrace.
For it's Tommy this, an' Tommy that, an' 'Chuck him out, the brute!'
But it's 'Saviour of 'is country' when the guns begin to shoot;
An' it's Tommy this, an' Tommy that, an' anything you please;
An' Tommy ain't a bloomin' fool - you bet that Tommy sees!

I don't know about you, but I think it's time to put an end to this Afghan thing, either by sending in massive reinforcements and actually paying the necessary price for final victory - in other words, not causing unnecessary death by doing everything on the cheap (one scandal for which Brown should genuinely never be forgiven) - or by bringing our army home. That's the choice Cameron will have to face. Why? Because, to coin a phrase, we can't go on like this.

Me, I would opt for the former and give our armed forces everything they need, and then some. Whatever it takes, Afghanistan, unlike Iraq, is the right war and is a war that we have to win. We must respect our troops properly, therefore, by backing them to the hilt, even if it means making some sacrifices at home in the short term.