The BNP Is Labour's Fault 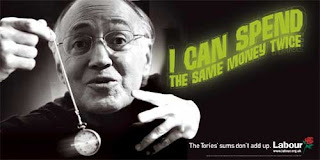 Labour's anti-semitism: inspiration for the BNP
Iain Martin has blogged today that the "rise" of the BNP represents a failure of "all the mainstream parties". While I am a fan of Mr Martin, I'm afraid on this occasion I'm forced to disagree. It is not the fault of the Conservative party. Nothing could be further from the truth and, if you read his article, that is exactly what he demonstrates. His conclusion that the emergence of the BNP is somehow every party's fault just does not follow-on from his argument and cited examples.

In the process of answering his own question of just why the BNP managed to gain 6% of the Euro election vote in the first place (in core Labour regions), he simply reveals the craven hypocrisy and disastrous hate politics of the Labour party and its leader, Brown - and nothing else. And yet Martin seeks, illogically, to apportion blame for the emergence of extremism in Britain equally. See for yourself:

The answer is that Britain’s three major parties, the wider political class and the media have all, to varying degress, badly let down their fellow Britons. They have done this by setting narrow terms for the national debate which exclude the concerns of millions of voters and force them out on to the fringes. Some decide there’s no point voting but a portion of them have ended up in the arms of the racist BNP.

Take immigration. Britain has had a dramatic increase in its population in recent years. In 2007 alone more than 500,000 immigrants arrived. There are many good economic arguments in favour of being a magnet for those who want to be in Britain to get on in life. But there should be sensible limits because of the pressure it puts on public services, housing and the stretched social fabric.

But it is not just that these concerns were ignored, anybody trying to raise them was shouted down and quite often smeared. In the 2005 general election, Michael Howard advocated limits and was branded an extremist by Labour, which simply wanted to make the Tories look old-fashioned and weird. Much of the media happily played along with the game, questioning Howard’s motives. Thus mentioning the I word condemned the speaker as obviously not as sophisticated as the metropolitan types who live in London and run politics and the media.

But what message did this send to those struggling to cope with the fall-out of this experiment on the ground? It said quite clearly: Your views are unpleasant, you don’t matter, we’re not listening, shut up. Thus a great many people felt they had been abandoned for a simple reason. They had been.

So it's the Tories' fault for being smeared by Labour for trying to respond to people's concerns over high levels of immigration, aided and abetted by a tame mainstream media, during a general election campaign, is it? I don't think so. And now the chickens a 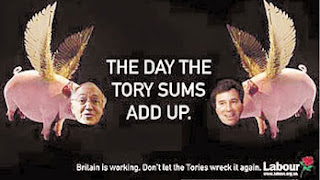 re coming home to roost. Nick Griffin, possibly the most ghastly man in Britain (Gordon Brown only manages a close second), like some overweight cuckoo has found his way into the Question Time nest in yet another example of media exploitation of a potentially explosive confrontation.

What makes it worse is that it's the BBC that's arranged the spectacle in what is in my mind an example of abject ratings-chasing. This, of course, being the same BBC that, as Martin puts it, "happily played along with the game" of Labour wickedly smearing Michael Howard in 2005 by branding him an "extremist" simply for seeking to manage immigration, something which Labour had, and still have had, notably - and in many ways spectacularly - failed to do.

Whatever the ins and outs of the debacle, to me it all boils down to one word: honesty. If Iain Martin and the rest of the mainstream media can't be honest about who has really caused the rise of extremism in Britain (England, actually) then there can be no way to begin to repair the social and political damage that's being done. It merely further compounds the ugly, dangerous dishonesty of Labour.

In their goal to demonise the Conservative party across swathes of Britain to ensure that large sections of the population share their blind, mindless hatred of all things Tory, they have used every propaganda tactic in the book, even to the point, if you recall, of turning Michael Howard into a Nazi-style anti-semitic caricature. By the end of the campaign, therefore, according to Labour propaganda, Howard was both a right wing extremist and a money-lending Jewish hate figure. As far as I am concerned, this was truly evil stuff and it had a terrible side-effect. Labour's lies, smears and Third Reich style approach to political propaganda gave permission to a section of society, mainly in its own heartlands, to hate. It made the rise of the BNP all-but inevitable.

So the origins of the rise of the BNP can be traced back to that general election campaign, the dirtiest and most dishonest on record. But all the dirt and dishonesty was coming from one direction: the Left. It's their core vote, whom they have subsequently thoroughly alienated by being so utterly useless in office, who are drifting into the arms of extremism and racial bigotry. Yet this is a key point that appears to escape all but the bloggers. The MSM seems to be happy to continue to peddle the Labour party's increasingly desperate message that the BNP, as a party of the 'far right' (it's not, it's a typically muddled, socialist/nationalist organisation), can somehow be associated with the Tory party. This is the ultimate smear and one where the deepest contradiction can be found. If this were the case, then why are the vast majority of misguided BNP supporters former Labour party voters? No adequate answer to this question has been forthcoming from the Left media as yet - it doesn't fit in with their dishonest narrative, you see.

The point, therefore, is that the blame for the rise of the BNP has nothing to do with the Tories, and Iain Martin and other independently minded, professional journalists should have the guts, or the sense, or the honesty - preferably all three - finally to acknowledge this.

What is certain, however, is that should they win the next general election, it will fall to a Conservative government to fix the problem, caused by Labour, of what is really the political dislocation and disaffection of fairly significant sections of Labour's core vote. How they go about that is beyond me, but they are going to have to try.

So there you have it, yet another dimension to the universal catastrophe that will be "Labour's legacy". And people still wonder why I am convinced that this is comfortably the worst government this country has ever had inflicted upon it.
Posted by Jon Lishman at 10/21/2009 03:35:00 pm