"I Thought He Would Grow Out Of It" 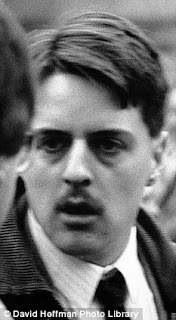 Young gargoyle in training: who's his hero, do you reckon?
According to Telegraph comment editor Ceri Radford, citing the Mail, chief gargoyle of the BNP Nick Griffin's own wife thinks he is bonkers and had hoped that he would "grow out of" playing at "stupid politics". I thought this was jolly funny.

Never mind that David Aaronovitch column pointing out exactly howthe BBC should
hold Nick Griffin to account for his holocaust-denying, racist,homophobic views;
my favourite piece of criticism on the BNP leader this week comes from no other
than his wife.

“I worked my a*** off trying to keep us going,” Mrs Griffin has moaned, according to the
Mail. “I’ve been … working to keep us going financially and bring up four children while he’s spent his time playing at stupid politics.” She added that she “though he would grow out of it”.

Not quite her hero, then.

I have my doubts that Griffin will be anything more than a side show on Question Time tonight, thankfully. There are many other things to talk about of far greater import than the sweaty racial fantasies of schoolboy bully who thinks Adolf Hitler was a really cool guy. The Mail says he is "dangerous and deluded". I'm not so sure. Deluded, certainly, but dangerous? Possibly, if his goonery spreads. But the one thing that the Euro elections clearly demonstrated was that pricisely that had not happened to anywhere near the degree expected.

I'm not suggesting for one moment that there should be any complacency, but that on the part, at least, of the Tories there should be no hand-wringing and no shame; they did not create this problem, Labour did. So let Labour wail and gnash their teeth and wonder where it all went wrong. Dismiss their slurs and smears and false associations between the BNP and the Tories for what it is: dishonest propaganda designed to deflect reponsibility for the emergence of a "party" which is as much a product of socialism as Labour itself. As I said in a previous post, the Tories should just ignore Labour's lies and get on with the rough, tough job of clearing up their mess, in this case a serious sociopolitical one.