Labour's Poll Dancing Just Goes On And On 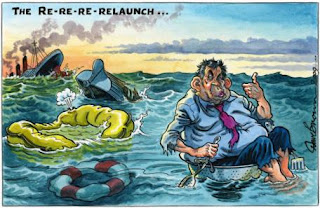 With the release of the latest ICM poll showing no recovery for Labour, Mike Smithson has repeated the question that most right of centre bloggers - and others - have been asking for the past six months at least: how much evidence does Labour need that Brown is a liability who will demolish any hope they have of rescuing the party from certain annihilation at the next election?

Another month goes by and Labour’s polling position remains dire with no respite in sight. For a new ICM poll for the Sunday Telegraph just being reported suggests that there’s been little change between the main parties since the last survey from the firm in the Guardian a week and a half ago.

Both Labour and the Tories are down two with the Lib Dems up three.

You now have to go back to December 2008 before you find an ICM poll where the Tories did not have a double digit lead. The current 17 point gap equals the second highest on record.

What will be very disappointing to Labour is that their ongoing attacks on the Tories for their alleged links with “far right parties” in the EU don’t seem to be having any impact. This has been just about their only line in the past fortnight and so far, at least, it has not benefited them in the polls.

To many in the Labour party ICM is seen as the gold standard because it has been round for so long using the same methodology and has a good track record. That will add to the worries.

The Lib Dems will be pleased that they are back over 20% and not too far behind Brown’s Labour.

We’ve said it before, I know, but you just wonder how bad it has to get for Labour before there is any thought of a leadership change?

With Brown now openly defying his own Chancellor, having comprehesively lost the argument on the state of the public finances this autumn, and opting for the nuclear option of further gargantuan chunks of "stimulus" spending next year, the feeling that he has taken complete leave of whatever senses he ever possessed in his increasing desperation is practically tangible. Tomorrow's Sunday Times will not make pleasant reading for Alistair Darling.

GORDON BROWN is planning a final public spending spree to help pull the economy out of recession and put pressure on the Conservatives over their plans for deep cuts.

The prime minister is keen to use the autumn pre-budget statement to announce a new “fiscal stimulus”, with billions of pounds of extra money for housing, infrastructure projects and training.

Recent figures showing that Britain is still in recession have convinced Brown that more spending will be required next year to support any faltering recovery.

Brown also hopes the stimulus package will open a new dividing line between Labour and Conservative plans over the public finances.

“At the next election we need a clear story to tell about how Labour will support the economy through investment while the Tories would choke off the recovery with draconian cuts,” said a cabinet source.

However, the proposals have caused alarm among Treasury officials who fear any increased spending could upset the financial markets, making it harder to service the growing national debt.

At last week’s cabinet meeting, a discussion over the latest economic data hinted at the tension between No 10 and the Treasury. Alistair Darling, the chancellor, warned ministers of tough times ahead and stated that any new projects would need to be “paid for by savings elsewhere”.

By contrast, Brown spoke of the importance of not withdrawing “support for the economy”.

It is also understood that there have been a series of disagreements in the National Economic Council, Brown’s “war cabinet” for the recession, where Darling has called into question new schemes to “support” the economy.

The pre-budget report, expected early next month, is likely to retain the pledge made in the spring to halve the public spending deficit, currently £175 billion, by 2014.

Ministers are now debating the budget for the 12 months beginning in April 2010.

Under current Treasury forecasts, expenditure will rise next year by £30 billion to £700 billion.

However, most of the increase is accounted for by debt interest and social security payments, while capital investment in housing and public services would fall in real terms.

The comments already appearing beneath the article demonstrate pretty clearly - at least to me - the mood of the public generally, and who it blames for Britain's parlous economic position: Gordon Brown. An example:

The only reason we are still in recession is because of Brown's reckless spending. All other countries took a measured 'stimulus' approach and have recovered. Brown is delusioned and no one voted for him to spend our money like this and put our children's children in debt.

The feeling must now be that Labour won't listen to public opinion any more than they have before about who the electorate wants to see gone because of this and so many other debacles: they want Brown gone - immediately. But no matter what Labour's fuhrer does to destroy their mythical Third Reich Way, for want of backbone they still stubbornly refuse to assassinate him.

The Tories are no-doubt counting on Labour's utter political cowardice - but the country will be paying for it. For decades.
Posted by Jon Lishman at 10/31/2009 10:36:00 pm