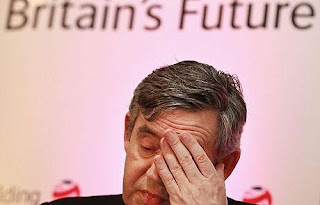 Hattip to Prodicus for this. The Tory rebuttal of the barefaced lies in Labour's pre-manifesto, published earlier today in the Brown-loving FT, for instance, pulls no punches. It also contains some policy substance. It's certainly worth the read...

In ‘The Choice for Britain’, Labour claim that by 2015 they would:

Claim: ‘have raised the living standards of those on middle incomes.’

Reality: Only this week, Gordon Brown himself admitted that the middle had been squeezed under Labour. The average family pays £1400 more per year in tax thanks to Gordon Brown’s stealth taxes. That’s before the rises in income tax, NICs, VAT, Fuel Duty, VED, and corporation tax that Gordon Brown is planning. (source below)

Claim: ‘have delivered low inflation and kept interest rates as low as possible.’

Reality: Britain’s low interest rates are thanks to the biggest recession since the war, deeper than the recession in America, which is hardly something to be proud of.

Claim: ‘have more than halved the deficit as a proportion of national income.’

Claim: ‘have helped to create at least one million new skilled jobs.’

Reality: In 2009, employment levels have fallen at record rates. There are now 664,000 fewer jobs in the economy than a year ago (ONS, Labour Market Statistics, September 2009).

The Government’s own projections show unemployment remaining above pre-recession levels for at least the next ten years (DWP, Jobcentre Plus Workload Projections April 2009).

Claim: ‘have built on our record, investing in frontline services such as schools, hospitals, and Sure Start Children’s Centres.’

Claim: ‘have a national social care service with personal care for all.’

Reality: Labour have provided no detail on what a National Social Care Service will look like nor how it will be paid for.

Claim: ‘expand the supply of affordable housing and give more help to first-time buyers.’

Claim: ‘have reformed our democratic institutions and given people a greater say.’

Reality: Gordon Brown broke his promise of a referendum on the European Constitution and transferred whole swathes of powers to unelected Quangos and regional assemblies. Only 1 in 5 people believe Parliament works well (http://www.ipsos-mori.com/researchpublications/researcharchive/poll.aspx?oItemId=2453&view=wide).

Reality: In each of the last three Labour manifestos they have pledged to cut UK carbon emissions by 20 per cent by 2010 - but they will miss their target by a wide margin. Despite Labour’s rhetoric on tackling climate change, the reality is that on the Kyoto Agreement basis carbon emissions have fallen by just 3.6 per cent since 1997. As a UN report has noted, ‘all the reduction took place prior to 1995′ (DECC, 2008 UK Greenhouse Gas emissions, provisional figures, 26 March 2009; UN, Human Development Report 2007/2008, 27 November 2007).

Claim: ‘have kept crime down and given communities new powers to improve their quality of life.’

Under Labour, there are 10,000 incidents of anti-social behaviour every day (Hansard, 21 January 2009, Col. 1486WA). The policies that Gordon Brown announced in his conference speech were all re-announcements.

Labour claim that by 2015 the Conservatives would:

Claim: ‘cut £5 billion from targeted investment in the recovery this year alone, and risk turning the recession into a depression.’

Reality: We have never said spending should be cut in 2009/10. At the budget we said spending should increase by £25 billion instead of £30 billion, with the remaining £5 billion being used to provide relief to the hidden victims of this recession - pensioners and savers. And leaked Treasury documents show that the Government themselves admit they are going to have to cut departmental spending from April 2010.

Reality: Inheritance tax is a tax on aspiration. And as we have always said, it is a fully funded tax cut, paid for by a tax on super-rich non-doms

Claim: ‘put jobs at risk opposing our fiscal stimulus, racking up a higher bill to pay for the hundreds of thousands more on the dole.’

Reality: It is Labour’s mismanagement of the economy that has millions of jobs at risk. The reality is that Labour’s plans for a tax hike on jobs just after the next election to pay for their discretionary ‘fiscal stimulus’ could slow the recovery and lead to thousands more jobs being lost. Our proposals for radical welfare reform will help to get thousands of people off welfare and into work.

Claim: ‘make life harder for families at work by cutting back on Sure Start and tax credits.’

Reality: This is not true. We have never said that we will cut Sure Start. On the contrary, we will bolster the scheme by making it more health-led: by refocusing money earmarked for ‘outreach workers’, we will be able to increase the number of health visitors. Labour has cut the number of health visitors by 13 per cent since 2004 - which means almost 2,000 fewer staff (Hansard, 3 March 2009: col1474W).

We have merely asked whether those earning more than £50,000 should receive tax credits. We have said that we will reform the chaotic administration of the tax credit system.

Claim: ‘scrap our guarantee of a job or training place for young people out of work for a year.’

Reality: This is a straightforward Labour lie. We have never said that we will scrap the Young Persons Guarantee.

Claim: ‘put the NHS at risk by mortgaging the assets of local hospitals.’

Reality: We will not put the NHS at risk. We want to give foundation Trusts far more freedom to innovate and to adjust the way they provide services in response to their patients’ wishes locally. They will not be able to borrow irresponsibly because, like the private sector, they will only be able to borrow to the extent that they can back it up with assets. And, while management and lenders will lose out as a result of failure, we have pledged to ensure that patients do not.

Claim: ‘put special interests before patients’ interests - scrapping Labour’s guarantees for patients, including the guarantee to see a specialist within two weeks if your GP suspects you have cancer.’

Reality: Labour’s top-town targets aren’t in the best interests of patients. The problem with targets is that they only focus on the procedural side of care and ignore the actual result of a treatment. So, for example, hospitals have been more concerned with treating cancer patients within a certain timeframe than making sure those patients get the right treatment that best helps them live longer. We will make sure hospitals focus on improving cancer survival rates, which are currently amongst the worst in Europe (Lancet, 21August 2007, EUROCARE-4 study), so that patients get treatment that is amongst the best in the world.

Claim: ‘cut the equivalent of 3,500 Police Officers from our streets this year alone

Reality: This is a Labour lie. There is plenty of scope to spend money more wisely without cutting front line services. Under our plans, there would be more police on the streets, fighting crime and catching criminals. We will make better use of the police officers we already have. We actually have more police officers than a decade ago, but they spend more time on paperwork than on patrol (Hansard, 21 April 2009, Col. 604WA). In government, we will immediately return more police officers to our streets by slashing the paperwork that keeps them at their desks.

Claim: ‘make it harder to use DNA evidence in catching criminals.’

Reality: We do not oppose the use of DNA. DNA is one of a number of important law enforcement tools. What we have said is that the DNA of innocent people should not be retained indefinitely. In December 2008, the European Court of Human Rights ruled that the current blanket and indiscriminate retention of DNA profiles of people not convicted of offences was a violation of the European Convention on Human Rights and therefore illegal. We have announced that we would adopt a system similar to that used in Scotland, where the DNA profiles of those not convicted of an offence would only be retained for those charged with a crime of violence or a sexual offence. In these circumstances, DNA profiles could only be retained for a maximum period of five years. Labour’s attack is designed to cover up their failure on crime.

Claim: ‘stand in the way of new green industries by opposing wind farms up and down the country.’

In January 2009 we published out Plan for a Low Carbon Economy, which set out the policies to make Britain a world leader in moves towards creating a low carbon economy. We will introduce a new entitlement for every home to be fitted with up to £6,500 of energy efficiency improvements; we will create a new national recharging network, enabling Britain to lead the world in electric and plug-in hybrid cars; enable biogas, methane produced from farm and food wastes, to replace up to 50 per cent of our residential gas heating; and provide government backing for a new network of Marine Energy Parks - all of which would create new green jobs.

Claim: ‘isolate Britain on the fringes of Europe.’

Reality: Britain is a large net contributor to the EU budget, one of its major economies, the third largest state by population and arguably the EU’s leading military power. Those assets mean that Britain’s voice, under any government, cannot be ignored. The Conservative Party has maintained strong ties with the governing parties in France, Germany and Sweden. The Conservative Party is by far the most influential British Party in the European Parliament.

A more comprehensive and devastating fisking of Labour's flimsy promises and mendacity I couldn't imagine. I think the Tories are finally going to play hardball after patiently putting-up with a trainwreck Labour conference full of hateful lies and smears.