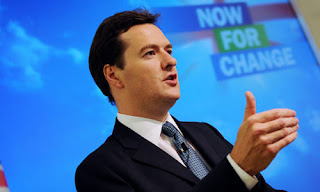 At last, a really great idea from George Osborne: the abolition of National Insurance for business startups. Read about it here.

The only way this country's economy is going to start to thrive again, after ten years of stagnation and contraction in the private sector, is if the Tories can encourage the entrepreneurial spirit in creative people. National Insurance relief for new businesses seeking to employ staff is certainly a start - and an excellent start at that - but it should only be the beginning of the process.

What should follow is a special, ultra-low rate of "corporation" (income) tax for startups and subsidies for business rates for, say, the first three years of trading. The benefits of these ideas far outweigh the costs in the medium to long term because the businesses are more likely to survive the crucial first years, become established, learn how to be profitable and begin to expand. Most will - or should - then be prepared for the changeover from "New Business" to, let's say, "Established New Business" status. A really imaginative solution to the shock of the sudden surge in operating costs could be to make it a step change - another two years, say, where there is a small NI contribution, full business rates and a slightly higher tax bill.

The point is that this sort of debate - and hope - is/was impossible under a Labour government that's been absolutely hell bent on bleeding the private sector white and then smothering it in red tape (in addition to the endless EU legislation currently strangling British businesses).

The Tories, in making these promises, have stated their intentions clearly, enabled the debate to begin and offered an incentive (albeit a small one) to the thousands of creative people in Britain with good business ideas and who don't want to sell out to Dragon's Den type parasites before they've even begun.

"We will send a message loud and clear that this country is open for business,"

Osborne said. And he is absolutely right. That's exactly what he has done. Amazing what one good speech and one good policy idea can achieve.