Nelson Blows Brown's Boasts Out Of The Water

In another brilliant, stinging post, Speccy editor Fraser Nelson has once again rapidly demolished Brown's outrageous, deluded and dishonest claims in a (predictably, pathetically fawning) Porter and Riddell interview in today's Telegraph that his economic (mis)management somehow saved Britain from depression. Far from doing anything of the sort, says Nelson, Brown single-handedly created the situation we are in, partly by borrowing far too much during the property bubble-boom and partly by making a complete pig's breakfast of banking regulatory reform.

But there's worse. After the bust and subsequent recession, Nelson proves, Brown has created a climate whereby the banks can rip and are ripping millions of mortgage holders off with impunity by failing to pass on the B of E's interest rate cuts. Add to this the debt crisis and you have what Nelson calls "Brown's double hit". And all this before we deal with Brown's utterly ridiculous claim that the economy will rebound into "upgrowth", to use his incomprehensible jargon (and as opposed to what, exactly, "downgrowth"?), in 2010/11. Just recalling the fact, quietly announced last week and buried away on the BBC's UK News section on its largely ignored teletext service, that the manufacturing sector shrank by a further 2.5% (bringing the total collapse so far to 11.1% - depression territory) and you can see that Brown is lying and lying big.

I've copied some extracts below, plus the devastating graphs that reveal in stark, chilling clarity the price of Gordon Brown's staggering and ongoing incompetence. Read it here. 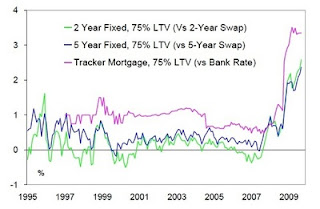 By now, you should have been able to remortgage and pay half the intrerest that you did. You are being denied this, because someone Scottish thought he would personally rewite the bank regulation system and proceeded to make an almighty mess of it. And the credit crisis may be global, but Britain is worse hit than anyone else. Look at the staggering graph below - JP Morgan data, based on IMF estimates, of the cost of the banking crisis not in billions, but as a percentage of GDP. 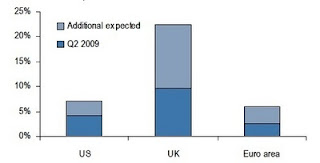 So yes, Britain is hurt more than twice as badly as America. So we pay for Brown’s bank incompetence in two ways. One is the national debt, which is increasing at a sickening rate, and the other way is by paying through the nose for mortgages. And because the banks are still screwed, they can act as a cartel and rip us all off. This is why Gordon Brown can probably be judged the most expensive leader of any Western democracy since the war. The costs of his arrogance, misjudgments and rank incompetence will be with us for years, perhaps decades, to come.

Regardless of these appalling figures, the Brownite/Labourist narrative refuses to lie down, even though it is now quite dead. People will simply have to trust that excellent journalists such as Fraser Nelson will keep on hammering away, revealing the truth behind Brown's epic lying and holding that terrible man to account on their behalf. He'll have to, because, bafflingly, the mainstream media (Jeff Randall excepted) seems positively hell-bent on preserving the Brownite lies and spin. Personally, I believe it's because of a combination of media capture (the "village" thing) and the fact that the MSM is populated by a bunch of lefties. Anyone got a better reason?

PS: The blogs have been on fire this afternoon over speculation that Brown is on the way out for "health reasons", citing his eyesight problems. I have only one thing to say about this: