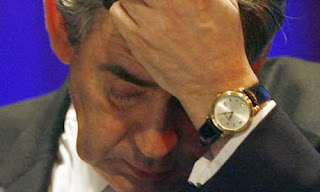 Sometimes Guido can be refreshingly pithy. His latest piece of pith is a fine example:

Bad Al is really grasping with this line of spin. Labour are 19% behind in the polls; suggesting that if people don’t really like the Tories, they must despise Labour. The voters have come to a settled view of Gordon – that he is a useless weirdo. You can’t spin your way out of that…

"Useless weirdo," lol. A fine pith-making effort. I love it.

There is one other thing this particular blogpost throws up, however: the polls from those days, as psephological guru Mike Smithson has pointed out on politicalbetting.com until he's blue in the face, were unreliable, heavily weighted as they were in favour of Labour because of poor practices. Polling methodologies have changed beyond all recognition and for the better since then with the result that they are now, by and large, completely reliable sources that quite accurately reveal voting intentions. Campbell either knows this and is being dishonest or he doesn't and he's being stupid. Either way, he's a damn fool for making the comparison at all.

If you want to know more about why you should be careful with historical polls, Mike Smithson explains here.

Fact is, a 19% Tory lead according to modern polling techniques means a sub-200 seat wipeout for Labour if that was repeated at the general election. And it's a reliable poll. Campbell can't spin his way out of that reality, either.
Posted by Jon Lishman at 10/24/2009 03:26:00 pm