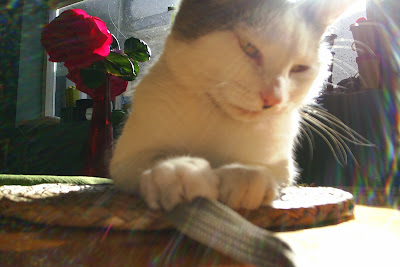 I would say sorry but I can't speak cat

After all this lefty "apology" nonsense for bad stuff that happened long ago, perpretrated by folk who in the main have long since gone the way of the dodo, it seemed likely that there would be something of a backlash against the idiocy, insincerity, mendacity, hypocrisy and futility of these political publicity stunts. Some of the blogs have had a pretty good crack at it today but I especially like this one from the ever-unapologetic Gerald Warner that's just popped up over on the Telegraph's website.

Gordon Brown is set to make a public apology for the Norman Conquest. Last night close aides and Downing Street insiders categorically denied that any such move was being considered, fuelling the growing consensus that a fulsome apology is imminent. One source who requested not to be named said: “Gordon has always felt strongly about the Norman Conquest and its disastrous legacy of hereditary privilege and a class-based society.”

Another Labour insider commented: “The main concern is the trauma still being endured by people of Anglo-Saxon extraction. They lost their language, their social cohesion and their political autonomy as a consequence of this foreign invasion. While England has a long tradition of welcoming asylum seekers and the oppressed, arrogant Norman aristocrats on horseback are quite another proposition. A glance at the Bayeux Tapestry shows the kind of thuggish behaviour in which they indulged. When a King of England is struck in the eye by an arrow it is clear that a coach and horses is being driven through health and safety laws.”

He hastily added that there was no reason whatever why a man with one eye should not rule England successfully for many decades, but repeated his strong condemnation of the Norman invaders: “The Battle of Hastings was an early spree by Bullingdon Club louts.” Climate change campaigners also suggested that man-made global warming may have begun with the Norman Conquest: “All those forges producing chain mail and steel weaponry, not to mention thousands of imported French horses breaking wind – the effect on England’s ecological system must have been devastating.”

Kev Engels, Professor of Historical Studies and Social Inclusion at the University of Brixton, claimed: “Exclusive, class-based terminology such as “serf”, “vassall” and “churl” date back to the events of 1066. You get social alienation due to people with “De” in their names discriminating on racial grounds against the indigenous population. A Marxian interpretation would identify this as the start of colonialism, which also laid the foundations of the class struggle.”

The question that was preoccupying the Westminster village last night was the scale of compensation that would be offered to victims of William the Conqueror. A spokesman for a left-leaning think tank said: “To apologise without allocating adequate resources to victims is meaningless.” He estimated a minimum investment of £3 billion would be needed, to fund resources for outreach, counselling and rehabilitation services.

Political observers agreed that, having ruled out a referendum on the Lisbon Treaty, an initiative hostile to Normandy, the nearest outpost of the EU to England, might be a popular stance for Gordon Brown to adopt in the run-up to a general election. A spokesman for the Football Association welcomed the likelihood of an apology, saying: “Hastings was a disaster. Our lads were knackered after a mid-week friendly at Stamford Bridge. They had horrific injury problems and should never have been asked to take to the field that day.” On a more optimistic note he added: “The Norman Conquest was a game of two halves.” Downing Street is still refusing to comment.

Warner clearly has asked himself, "Where will this all end?" The answer to that question is that it's very hard to say, but his witty reductio does give us some clue. Idiot lefties like Brown and his Australian counterpart idiot lefty, Rudd, are capable of just about any level of hypocrisy if they think it will go down well with their socialist constituencies. I just wish they wouldn't do it "on behalf of the British/Australian people." I'm not bloody sorry.

So just where will it all end? My view? Well, you have to follow it through to its logical conclusion. Given all the leftwing hand-wringing about the impact of humanity on global ecology, I suggest that the next official retrospective apology should be to plant and animal life everywhere. The shameful period of human evolution that resulted in us inheriting the status of Top Dog of the Biosphere is a stain on the history of the world, if not the universe.