As a new report from the Bank of England is released, predicting a slow and painful return to growth for Britain starting in January 2010, and, bizarrely, enduring low inflation, one is left wondering if any of them can have any credibility left at all. I say this cautiously; the real villain of this piece is, always was and ever shall remain Gordon Brown whose mixed signals (orders?) to the Bank for so many years have been leading it up the garden path ever since it was given its so-called independence. This was Brown's bust, following inexorably on from Brown's mega housing boom. But he could not have done it without a fairly tame governor and Monetary Policy Committee so they are not exactly blameless themselves. 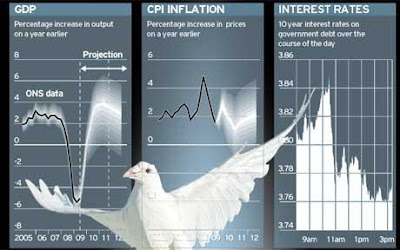 However, bad though that is, it's not really the thing which annoys the most. No, what really gets to me is the total, ongoing arrogance of this bunch of overblown economists (soothsayers and pseudo-scientific charlatans, in other words) whose every prediction thus far about the state and direction of the economic condition of Britain since Brown's uber-bust began (which they did not see coming incidentally, an epic failure surely on a par with the CIA failure to spot the fall of the Soviet Union and the end of Cold War: exactly what they were there for!) have been wrong - and not just wrong, mind you, but massively, wildly wrong.

The question is, therefore, when Mervyn King says that growth is around the corner and inflation is "dovish", why on earth should anyone believe him? Sure, if you look at the graphs, what you see is a very long, drawn out version of the Darling "trampoline" V-shaped recovery (the trampoline's springs were a bit loose, eh Darling?). In fact, for most of 2010 and early 2011 all you really have is stagnation. If you look at the lower tolerances of said graphs (which betray the scale of the B of E's hedging), I suspect you are looking at something that more closely resembles what will emerge as reality: zero or weak growth for up to three years with the distinct possibility of a double dip recession by 2011/12. Factor in the inevitability of currency devaluation thanks to the deficit, the debt crisis and subsequent inflationary pressures, and yes, you have the old Labour disease back with a vengeance: stagflation. It's the word economists dare not utter. It is That Which Must Not Be Named - the Lord Voldemort of economics, whispered only by the brave or the foolish: "stagflation". Well, I must be Harry Potter, then, because I'll bloody well shout it from the rooftops: S T A G F L A T I O N!!

Point is, I wonder why this or, at least, something like this, isn't really being talked about, especially in the mainstream media. It is almost certainly the most likely outcome of the current, parlous economic state Britain finds itself in, with huge amounts of slack in the economy, no credit and virtually no demand, but with ever-active unions and wage inflation, a fragile currency and a world that's losing faith in Britain's ability to pay for its debts. So the question must be, just how much political pressure is being put on King and the MPC by Brown and Darling and Balls and Mandelson (what a bunch that is)? I would have to say a hell of a lot and it has helped to destroy their reputation.

Answer? Well, in the short term at least Osborne should bring the Bank back under his control, at least until a genuine, less tarnished, contaminated kind of independence can be designed. At the moment, the Bank simply doesn't deserve its independence, even if it is now independent only in name. A shake-up is definitely required, and a complete change in policy direction, if we are to have any hope of avoiding that which must not be named - urgently. So why not start with the Bank of England?
Posted by Jon Lishman at 11/12/2009 02:59:00 pm