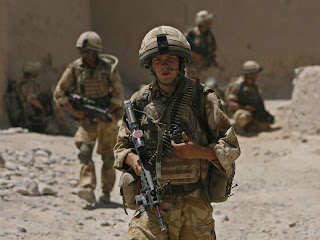 Seems Brown's reliance on the decisiveness of Barack Obama over an American troop surge that will, at least, we assume, in Brown's fevered, rather cynical mind, somehow shore up his unravelling policy and dwindling support for the Afghanistan war really is starting to hurt him. James Forsyth in the Speccy has written, in answer to a very pertinent question he puts, "How long can Obama leave Brown hanging on over Afghanistan?":

Gordon Brown is in a nigh-on-impossible position on Afghanistan until President Obama makes up his mind about how many more troops he wants to send and what strategy he wants to pursue. Yesterday at PMQs, Brown said with a sense of relief that there would be a decision from Washington in days. The White House rapidly distanced itself from Brown’s comments. Now, the New York Times is reporting that the ‘announcement is still likely at least two weeks away – perhaps more.’

Two weeks where Brown can’t say that Britain is winning in Afghanistan but equally can’t announce a new strategy is going to be corrosive of support for the Afghan mission in this country. It is going to add to the sense of drift and that soldiers are dying there for the want of a better option. In a very different way, Obama is turning out to be as problematic an ally—if not more so—for Brown as Bush was for Blair.

On the British Army's current mission impossible down there, at least while it is chronically and dangerously undermanned, under-resourced and unrepresented in government, that is, Forsyth is absolutely right. As a bereaved mother of a dead soldier has just said on Sky News, referring to the MoD bonuses scandal: "You don't win wars with budget cuts."

It is also now becoming very clear that the White House is not the only seat of power "rapidly distancing" itself from a Prime Minister who is, clearly and deservedly, finally coming to the end of the road.

Obama may be indecisive - who knows? - but at least he has a mandate to govern, indecisively or otherwise, something he clearly now realises Brown will never enjoy. Besides, as one American friend recently told me, most Americans who have ever actually heard of (or heard) Brown - presumably this includes some politicians - think he's a bit of an asshole. I wonder whether they have also come to the same conclusion as, according to Alastair Campbell, The Sun newspaper has here:

“The Sun, largely for its own commercial and marketing reasons, decided to come out for the Tories at Labour’s conference. They don’t like to back a loser…” *

It's increasingly apparent, what with the G20 snub and now this, that for what are no doubt his own political and diplomatic reasons, Barack Obama doesn't either.