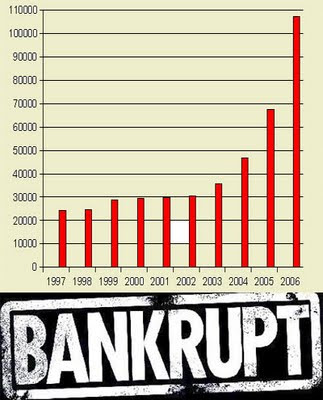 This is the implication of Mervyn King's long-overdue criticism of Crash Gordon's mishandling of the economy and creation of the largest peacetime deficit in British history, ostensibly somehow to buy his way out of recession, but in reality to try to generate some sort of fake recovery in the run-up to the general election, thereby, somehow, securing a victory. God help us all if that works.

Well, that's precisely the point, isn't it? Whatever the motive for Brown's profligacy, it's becoming abundantly clear that it won't work. Britain is not recovering, in spite of the gazillions of pounds, much of it printed, being poured down the drain to make up for Brown's truly horrific, banana republic-style borrowing and spending splurge. King, it seems, has finally come clean on the scale of the government-led secret, further bailout of those two giant Scottish banks, RBS and HBOS, (£61Bn) whose chiefs were so very close to Brown and other Scottish Labourists, and who brought such pain to the people of Britain as a whole with their casino business practices and high risk, rank profiteering. He seems to have had enough of carrying the can for all Brown's gargantuan errors of judgment, both as Chancellor and as unelected Prime Minister.

Today's Telegraph report therefore makes refreshing reading, at least for me, loathe Brown and support the Tory plan for saving the British economy as I do.

In comments which are likely to infuriate Mr Brown, Mervyn King said that the next Government would need to “eliminate a large part of the structural deficit” over one parliamentary term alone. This proposal goes significantly further than anything penned in by the Government in the Budget, or what is demanded by the Fiscal Responsibility Bill unveiled last week in the Queen’s Speech.

In a hearing of the Treasury Select Committee, Mr King said repeatedly that the Government’s plan needed to be “credible” and detailed, or it would lose the confidence of the international investors who buy British debt. He said: “I think [the plan] has to be something where a really significant reduction in the deficit, the elimination of a large part of the structural deficit, takes place over the lifetime of a parliament, which is the period for which a government is elected. Beyond that is a statement of intent and hope rather than a plan for which someone can be held accountable.”

This, to me, represents not only a "rebuke" of Brown for his incompetence and subsequent complacency about the state of the national finances, but also a clear message of support for George Osborne. And it goes further, according to the report.

In comments which will further rattle markets, Mr King said that the top-tier rating on Britain’s debt could be at risk if the Government does not go ahead with significant cuts.

This is arguably the sternest of the numerous warnings the Bank’s Governor has issued to Mr Brown over the size of the deficit. It is the first since Mr Brown announced last week that the Government would draw up legislation forcing it to cut the deficit each year for the next decade and insisting that it halves the budget deficit within four years. Since then, however, official statistics have shown that the Government is still borrowing cash at the rate of almost £3 billion a week.

I wonder how Brown will get his revenge. Remember, you see, for 'moral compass' man, it's all about politics and always has been. He will burn anyone down who shows dissent and over whom he exercises some form of control. That's Brown's way, the way of the bully, the coward and the demagogue.

It's also the Labour way. An expert has just spoken out of turn, in this case Mervyn King. We know how Labour deals with people like that, don't we Professor Nutt?

But hey, things can only get better. We can vote the bastards out in 2010. As one poll shows, published at the same time as that Guardian Ipsos-Mori rogue, (another puts Labour back down on 22%, on point ahead of the Liberals), it's looking increasingly like that's precisely what we will do. And there's nothing Brown, Mandelson or the rest of that shower of lying, ruinous losers can do about it.
Posted by Jon Lishman at 11/24/2009 07:23:00 pm