Gordon Brown: Not Just An Idiot... 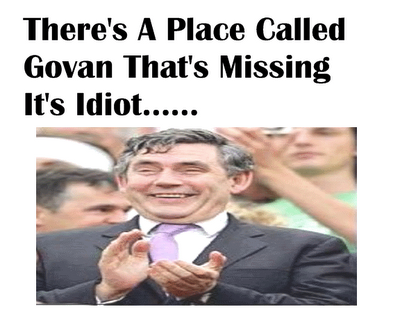 Just got back from a spell of Christmas shopping. I know, a bit early for a bloke, but I thought I would miss the rush and I knew what I wanted, so I thought it would only take an hour or so. Fat chance - it was hell out there! Then driving home I wondered to myself, is this a sign of economic recovery? Could be. Could be.

...and it's a big "but" which is followed by the now all-too familiar name of the one-eyed Scottish incompetent, Gordon Brown. David Blackburn has proved that while he is many things, all bad, he's also something more, incredibly: he's politically naive. This king of bust, who presided over (as unelected Prime Minister) and largely was to blame for (as useless Chancellor who borrowed into a property bubble that his deregulation of the banks directly caused) the biggest peacetime crash since 1929 and the worst recession in post-war history, is now jeopardising the recovery as well with his stupidity and tribalism before it's even had a chance to start. Read it and weep:

The Times’ Ian King writes that Dubai’s predicament presents an opportunity for the City to attract new business. There is no reason why, with attractive incentives, London shouldn’t capitalise on Sheik Mohammed’s momentary lapse of reason. However, the appointment of Michel Barnier, an evangelical protectionist who makes Joseph Chamberlain look like the father of Free Trade, as EU regulating supremo is a disaster for Britain.

The appointment raises further questions about Gordon Brown’s acceptance of Baroness Ashton as the EU’s foreign minister. Michael Fallon is no doubt:

“Brown has been completely outwitted. We now have none of the three key economic jobs in Brussels. This has all happened at an incredibly dangerous moment when there are firm proposals which will govern regulations on banking, insurance, private equity and hedge funds.”

Despite its insistence to the contrary, Downing Street has failed to protect financial regulation from falling into foreign hands. The outmanoeuvred Prime Minister has left the City at the mercy of a politician who believes there is “too much free market liberalism”. No wonder the French are so keen on Gordon Brown. Recovery has been jeopardised by political naivety.

What we did to deserve this imbecile is anyone's guess. Oh, that's right, about nine and a half million idiots voted him in in 2005. Hang on...