"Time for this Idiot Incompetent to Call an Election General" 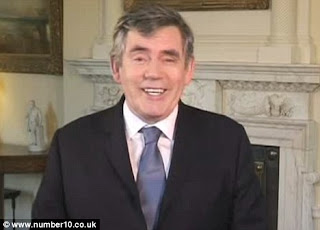 Listening to PMQs in the car earlier today was not a very pleasant experience, save for one thing. All the Labour crowing and fake hilarity at Cameron's so-called U-turn on the referendum served only one, unintended purpose: it showed them up for the lying, scheming, malignant, two-timing, self-serving national wreckers that they really are. And how! By pouring meaningless scorn on Cameron, who was railroaded into his decision in much the same way the entire country has been railroaded into an EU constitution by this Labour government, they merely showed themselves to be capable of any level of betrayal and of breaking any promise to further their puerile, socialist-federalist agenda. Their line of assault backfired, and backfired pretty comprehensively, because they are so utterly out of touch with the will of the people they claim to represent.

The least representative of them all, architect of the EU constitution stitch-up, and crower-in-chief, Gordon "Iron Cast" Brown, came across as a shifty, unpleasant doubletalker as he tried to score petty points off a statemanlike David Cameron. The Speccy's Lloyd Evans summed it up very well earlier today.

There were a few lighter moments today provided unwittingly by Labour’s whips. These parliamentary gangsters had spent a busy morning getting backbenchers to memorise questions. Here was their plan. (Decide for yourself how brilliant it was.) The stooge was ordered to refer to a promise Labour has fulfilled thus providing the PM with a chance to needle Dave over the Euro-referendum. Brilliant or not, the scheme misfired. Asked about cancer waiting times Brown cheerfully launched into ‘a quote from the shadow health secretary’. Mr Speaker promptly cut him dead. ‘I don’t think we need to go into that today, prime minister.’ The yellow card should have warned David Blunkett to alter his question but, no, he surged onward into the waiting trap. ‘What does the prime minister think of the credibility of a party leader who has made a cast-iron guarantee that turns out to have been made of plywood?’ The Speaker instantly ordered Brown to refer only to government policy. This effectively muffled the PM’s guns.

During the occasional moments of levity, Brown seemed in a jolly mood today but he didn’t realise the joke was on him. Briefed to keep mentioning Labour’s ‘cast-iron’ promises he continually repeated the phrase ‘iron-cast promises’. Time for this idiot incompetent to call an election general.

Amen to that. But Cameron has since come out fighting, disappointing the leftwing press of the Grauniad and the BBC by instantly proving that there will be no split in the Tory party over what is, after all, a cynical breach of a manifesto pledge by the Labour party. It is an unfortunate position to be placed in, to be sure, but we have all been placed in that position, not just the Tories. Labour's (and the left media's) massive miscalculation is in imagining that this has somehow harmed Cameron or the Conservatives. It hasn't. All he and his party have to say - and they would be truthful in saying it - is that it's not the Conservative Party Labour has harmed with its double dealings on Lisbon, it is every British subject. In addition, now that Cameron has outlined his key policy changes in his speech this afternoon, in which he promised the setting up of a constitutional court, referendums for any and all future EU proposals that materially affect the British constitution and to claw back powers from Brussels, I predict that support for the Tories will, if anything, grow.

It was a major miscalculation for Labour and Brown to behave in that way during PMQs. In gleefully attempting to rub the Tories' noses in what they and the press have wrongly branded a broken promise over the referendum, in reality they were laughing at the people of Britain. That will only make the electorate more furious about the government's appalling behaviour and even more hostile to Brown, who, as Evans points out, couldn't even get his lines right ("Iron cast", anyone?). He's not just an arrogant, politically tone deaf bully, he's completely flat-footed, to boot, and when people are faced with a political fait accompli, against their will, they simply revolt. Cameron knows this so watch as he runs rings around Brown from now until Labour's election defeat.

The spectacle of Brown being jolly at the expense of the British people will not be forgotten - or forgiven - any time soon. If their broken manifesto promise on a Lisbon referendum, which helped to win Blair the '05 election, was just a joke to Labour, then that joke was not on the Tories, it was on us, the British people. "Dumb" is, I think, the right word to describe their posturing. Dump and insolent - and politically suicidal. Then again, if Labour and Brown "got" that, they wouldn't be 17 points adrift in the polls (and rising) and about to be annihilated at the next GE.

As far as I'm concerned, therefore, they can laugh and be as scornful as they like from here until doomsday. "Doomsday" being May 9th 2010, at least for Labour.