Denis MacShane Makes a Tit of Himself (Again) 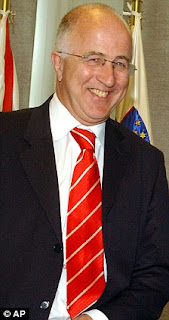 After the Guardian, the Spectator's cuckoo lefty Martin Bright and every other left-leaning media outlet, now Liberal Conspiracy is desperately trying to keep the biggest non-story of the year afloat by repeating habitual Labourist exaggerator rentagob, Denis MacShane's, dumbo list of impertinent, unresearched questions for William Hague about, you'll never guess who, Michal Kaminski. Hague's laser-guided exoceting of banana boy Millipede's ongoing lies and smears in yesterday's Mail appears to have found its target, therefore, and caused a great deal of damage given MacShane's rather muddled and somewhat shellshocked response. First, though, it's worth repeating the comment of one LC commenter, called "Watchman," (who, it's indicated, is no particular friend of the Tories), which comprehensively fisks MacShane's nonsense.

Lets analyse these points one by one (ignoring the poor use of capitalisation, the lack of courtsey in using honorifics etc which one would hope for from an MP).

1. Does he agree with the Chief Rabbi of Poland’s criticism of Michal Kaminski’s views on the murder of Jews at Jedwabne?

Nicely phrased, since the views are that Poland as a country should offer no official appology for the criminal acts of certain of its former citizens, which seems valid. Is Mr McShane going to appologise for all the burgalries committed in the United Kingdom between say 1820 and 1830 by British and Irish subjects? Because this is exactly the same logic, just a lot more obviously stupid. A crime is a crime, and is the responsibility of the person who committed it, not all of us.

2. Does he agree with the Chief Rabbi’s views that Kaminski sought out to join and was active in a “neo-nazi and antisemitic” party when he started political activity?

Nicely phrased again. I do not recall that the Chief Rabbi ever said that Mr Kaminski had sought out a neo-Nazi or antisemetic party, merely an opposition party which subsequently has become such. As an illegal opposition party its views were somewhat less well (if that is the right word) formed.

3. Does he support ECR MEPs appearing on Radio Maryja which the Vatican and Polish Holocaust survivors have criticised for its anti-jewish broadcasts?

Does it matter? Should elected representatives only appear on broadcasters they agree with (that might cut down the number of politicians on the BBC of late)? Is it not perfectly acceptable to appear on a hostile platform to put your own views, or is such debate unacceptable to Mr McShane?

4. Does he support kaminski’s homophobic language?

No. And neither, now, does Mr Kaminski, who admits using the phrase was wrong. However, we probably have all used words or phrases we now regret at some time, including Mr McShane. Admitting mistakes is admirable, sticking to them is merely stupid.

5. Does he think President Kwasniewski was right to say sorry for the Jedwabne massacres and Kaminksi wrong to attack that apology?

I think as a possible future foreign secretary Mr Hague should not be speaking on this issue, but there is nothing morally wrong with either position.

6. Will hague be joining his new friends in Latvia when they commemorate the Waffen SS?

Does Mr McShane not read anything anyone else writes? All major (non-Russian) parties in Latvia commemorate all the dead who fell in World War II, which includes those who fought for the Nazis, those who fought for the communists and the innocent victims. So this is doubly selective – focussing only on one party and one section of the commemorated. Hardly convincing.

7. Does William endorse the efforts of the PiS (Kaminski’s party) to ban gay pride marches in Warsaw

I guess not myself. So after six failures, finally a hit – a local political matter has resulted in an unacceptable decision, so we must beat up the foreign affairs spokesman of a party in another country, allied to the party in question. Unfortunately, this is hardly going to be a unique occurence, and all parties will be equally vulnerable to this sort of thing. And, to be honest, do we need to go to Poland to find local political bigotry etc.

8. Do the Tories endorse the Germanophobe line of the PiS and the kaczynski brothers?

Thinking Germany has too much influence and power over your own country is not Germanophobe, it is merely a political point of view.

9. Why do Nicolas Sarkozy and Angela Merkel brief openly that Cameron is “untrustworthy” (see saturday’s Gdn)?

I give up. Does Mr McShane even check his sources before making a fool of himself like this. This was never said.

10. Does he agree with the Economist that he has created a “shoddy, shameful alliance” with Kaminski and Vile?

I doubt it. But then again why would Mr Hague agree with an avowedly Eurofederalist publication? Does Mr McShane agree with the Spectator that he has firmly lost this argument?

I would say my respect for Mr McShane has gone down having read this, but unfortunately this sort of desperate muck-flinging (easily answered) is exactly what I have come to expect. If Labour wants to be a serious force for good in politics (which is to be desired) it needs to marginalise the facile and fatuous puff, with almost no facts behind it, the likes of Mr McShane produce; it does not even warrant the name of spin, as at least that has to be convincing and not demonstratably wrong. To allow Mr McShane, already recently wrong on the number of trafiked sex workers but determined to defend his figure with no evidence, to keep highlighting weak arguments like this will just present an image of a party with no moral compunctions regarding evidence, which might not be a good thing at the moment.

Ouch! One other point, of course, is that all this has merely served to do is to make outlets such as Liberal Conspiracy (is it possible?), The Grauniad ('twas ever thus) and even Martin Bright (shows occasional flashes of journalism) look more and more laughably stupid while they go on and on - and on! - flogging a horse that's been dead for so long now, it's stinking the place out. But hey ho, I guess they're just following orders. "Ours not to reason why," and all that.

After all these coordinated Labour lies, smears and spin have finally dissipated, however - like pollution usually does - there do remain one or two unanswered questions to answer. They are the ones William Hague puts to Labour in his cogent, clear, well-supported article (MacShane, take note! That's the way to do it). I won't go into all of them here - you merely need to read the article to see them for yourself. But there was one in particular that struck me as more than merely of party political point scoring significance, and that's the question of the role of the Foreign Secretary.

...I have still been shocked to see Mr Miliband and other Labour politicians spend their time trying to orchestrate a ruthless smear campaign against the Conservative Party’s allies in the European Parliament.

The Foreign Secretary used his Labour Party conference speech – his moment to give a positive vision of Britain’s future in the world – to make appalling accusations against Polish MEP Michal Kaminski, the party of the President of Poland and one of the governing parties of Latvia. That was not the behaviour we have the right to expect from a Foreign Secretary.

This is far more damning than claim and counter claim about whose EU grouping has more nuts in it. It's about the competence, the integrity and the suitability of a person currently pretending to occupy one of the great offices of state. As John Ward wrote earlier today:

The really daft thing about the smear claims is that they have been so easy to comprehensively disprove. It makes David Miliband look a complete idiot and certainly an incompetent politician.

William Hague has forensically dissected the whole business in his customary fashion, and has left no wriggle room at all: it is an open-and-shut case. He has been generous in merely asking for Miliband's retraction and an apology: it really should have been a resignation from the Cabinet and spending the rest of his parliamentary career on the back benches.