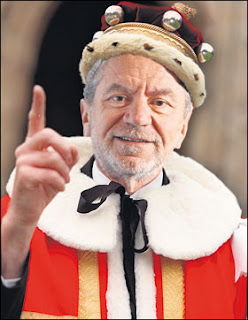 DT sports guru and recent convert to rhymeless political doggerel with a tinge of satire, Jim White, has come up with a little bit of a witty gem on his blog this evening. The format he generally favours (comedy dialogues) can be somewhat hit or miss. But in his characterisation of bonehead multimillionaire Brownite Labourist, Lord Sugar of Generic Electronic Tat, this one is a palpable - and really rather funny - hit. (His Rafa Benitez is pretty goofy, too.)

"The Government's new enterprise tsar, Lord Sugar, has dismissed complaints from an audience of small businessmen about the difficulties of raising credit with the curt observation that such firms were "moaners" who "don't need the bank – they need an insolvency practitioner". But what if he was asked to give similarly robust advice to others with work-related problems?

[The scene is the boardroom at Lord Alan's headquarters. He is sitting at a table, flanked by a couple of silver-haired assistants. He picks up the phone.]

Lord Alan: Send in the first client would you please, Frances.

[An overweight young man with stubble walks in, sits down and slings his feet up on the boardroom table.]

LA: Sounds like things are going all right, so what you wasting my time for?

CM: Well, there's talk they might replace me on the breakfast show.

CM: They're listening to Evan Davies on Today.

LA [suddenly reddening with anger]: You mean him off of Dragon's Den? Don't talk to me abaht Dragon's blahdy Den. Nicking all my viewers from The Apprentice, claiming they're interested in small businesses. I'm the small business tsar. I'm the one who should be telling small businessmen to get lost. Now get out for mentioning his name. Frances, next one, please.

LA: What you doing here?

DH: I'm about to fight for the World Heavyweight Championship against Nikolai Valuev, a seven-foot Russian.

LA: So, whatchoo gotta worry abaht? You're right at the top of your game.

DH: I'm worried I'm going to lose, because I can't reach his chin.

LA: Well buy a bleedin' stepladder and stop moaning. Next.

[A slightly overweight man with a goatee beard and spectacles walks in, sits down and starts gesticulating.]

LA [addressing his notes]: It says here you're called Rafa Benitez. And what do you do, Rafa?

RB: I am manager of Liverpool Football Cloob.

LA: And what's your problem?

RB: There is my owners, who do not give me no money to buy decent players. There is Lyon football cloob, who scores lucky equaliser when they should be allowing me to do my job. There is my players, who expect me to pass time of day with them in training ground. I am working with my hands tied behind my back. Yet the press, the fans, the board, they all call for me to be sacked. What to do?

RB: This is what I want to know.

LA: Win some blahdy football matches and stop moaning. Next.

[In comes a man in a pinstriped suit.]

LA: You look a bit faceless, who are you?

Faceless Man: I run the Royal Bank of Scotland. We racked up losses of £2.7 billion last year and I'm concerned about my bonus.

LA: Listen, my good friend, don't you worry abaht that. Frances, get Alistair on the blower, pronto. [To pinstriped man] I know someone who'll sort you aht with a few notes, no worries. We wouldn't want your sort suffering, would we?"