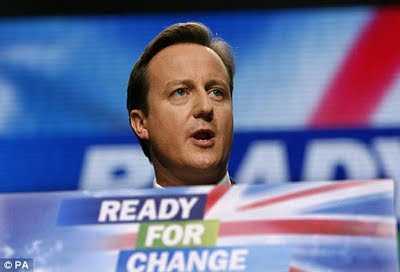 Stating the bleedin' obvious is something that must be intensely admired in these days of psychologically disturbed political denial. Edmund Conway, an economics journalist who has, it seems to me, flip-flopped over the foolhardy, potentially disastrous response by this Labour government to Brown's bust and subsequent recession, as much as virtually every other economics journalist, has actually flagged-up a report due out this week by the "right leaning" think tank, Policy Exchange, which warns that the next government faces economic catastrophe if seriously tough action is not taken to tackle the deficit and the debt head on immediately. I tell you what, though, Policy Exchange must be staffed by individuals with First Class degrees in the bleedin' obvious, and buggar all else.

Anyway, here's what Conway has to say about it:

The warning forms part of the most comprehensive assessment yet of spending cuts and fiscal consolidations throughout history, and will increase pressure on the Chancellor, Alistair Darling, to avoid pre-election giveaways in the pre-Budget report early next month. The report, from right-leaning think tank the Policy Exchange, said that the lesson from history is that the next Government should slash its deficit with a combination of 80pc spending cuts and 20pc tax increases.

The report, set to be published later this week, also urges the Government not to wait until the recession is over before imposing cuts. Its author, Policy Exchange's chief economist, Andrew Lilico, said that if the next occupants of Downing Street hesitate even briefly, they could subject Britain to a currency crisis.

With Standard and Poor's, the ratings agency, having issued an explicit warning over UK net debt, which is expected to rise towards 100pc of gross domestic product in the coming years, both Labour and the Conservatives have committed to reducing the Budget "more ambitiously" from next year. But neither has committed explicitly to raising taxes, or to inflicting across-the-board spending cuts.

However, the Policy Exchange study says that the lesson of history, and of every major fiscal consolidation both in the UK in the past century and recently in countries including Canada, Sweden and Germany, is that both of these measures may prove necessary. In previous episodes of fiscal consolidation, the deficit cuts promoted rather than hindered the recovery, but almost invariably created social tension as people came to terms with the resultant austerity.

More uncomfortably, the report reveals that the next government will be unlikely to avoid having to cut spending on welfare and defence and laying off public sector staff. It points out that in the 1920s, as Britain faced up to its wartime debts, it was forced to cut civil service numbers by 35pc. In the early 1930s, core public sector workers including police, doctors and those in the armed services faced significant pay cuts.

In all cases – even Canada in the 1990s – governments were forced to raise taxes as well as cutting spending in a bid to bring their deficits under control.

Mr Lilico added: "The evidence shows that reducing the deficit quickly is more likely to promote recovery than impeding it. That is more likely to be successful if you can combine the fiscal tightening with monetary loosening, in other words the Bank pausing quantitative easing so as to give it some ammunition for the coming years.

"The political consequences are less encouraging. In other countries, the public often supported a government; in the UK, apart from Thatcher, every party that cut spending dramatically found themselves out of power for more than a decade."

It really is all about courage, then. Let's hope I'm right in my belief that Cameron possesses that quality in abundance because as soon as he enters Number 10, he's going to need tons of it to tackle the giant, rancid mess left behind for him (and all of us) by Brown-Labour.

Remember to thank Gordon Brown for that, then, just before you vote Conservative at the next election. And you must do that because they're our only hope. Get over yourself.

PS: Conway has followed it up with this breakdown of the Policy Exchange's recommended squeeze. Interesting reading.
Posted by Jon Lishman at 11/17/2009 11:20:00 pm