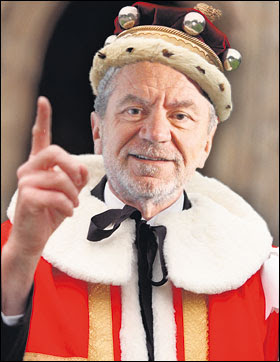 Iain Martin, on his increasingly brilliant new blog for the Wall Street Journal Europe (which, incidentally, is run by another British stalwart of journalism, former Sunday Telegraph editor Patience Wheatcroft), has noted that Lord (nee Suralan) Sugar's showcase for managerial bullying, The Apprentice, has been axed by the Beeb until after the General Election. We will therefore see even less of this executive dinosaur on our screens than first thought, following his inauspicious and bizarre (and typically insulting) outburst against the constituency he was charged with supporting (or, as he prefers, "championing") - small businesses. Oh joy unconfined.

A big businessman with small business mentality himself - he sees all others as rivals, or all rivals as 'other' (it's hard to say) - he was, perhaps, the worst possible appointment for this role Labour could have conceived. Then again, for a while back there Alan Sugar was bafflingly popular. And that's all it took to get him hired by Mr Universally Loathed, Gordon Brown.

When he joined the U.K. government, and entered the House of Lords thanks to Gordon Brown’s patronage, Lord Sugar seemed completely baffled as to why anyone might think this move had political connotations.

“I don’t see this as a political thing - I know everybody else does,” he said nonchalantly on the Andrew Marr show, shortly after his appointment.

But that’s the thing about taking a seat in the upper house of the legislature. It…tends…to…be…a…political…thing. Especially when you take a job from the government.

“It’s very simple - all I am is an adviser, I’m not a policymaker,” he went on. “I have been loyal to Gordon Brown and the Labour party for quite a while, but I also have my loyalties to the BBC.”

Others were less sanguine, the Conservatives in particular. Shadow culture secretary Jeremy Hunt demanded an inquiry. There was no way, the Tories said, that the Apprentice could be aired in the run-up to or during a general election when Sugar worked for the government.

Well, the BBC has caved in. The next series of the Apprentice is to be delayed until the summer and after the last possible date of next year’s election. The BBC Trust has ruled that there is an “increased risk to impartiality”.

I think it's safe to say from this that the BBC has now decided who's going to win that General Election now and is scared shiftless of upsetting them. They should be.

By the way, I have a story about Sugar you might or might not like. In the mid Nineties, my brother worked for a software company with a colleague who had once had the misfortune of working for Sugar's consumer electronics outfit, Amstrad (or "Alan Michael Sugar Trading" for those that don't know). One of Sugar's methods of "personnel management", so my brother was told, involved walking across the shop floor at fairly regular intervals randomly firing people, especially middle managers and techies. No reason given, just the order of the boot. He would then see if the company could survive without them and, if it was found it couldn't, he would have them rehired soon after. One such victim was hired and fired no fewer than three times during his bumpy time with the firm. Sugar's tyrannical behaviour and the understandable fear of his cowed employees who had to put up with his primadonna-ish mood swings and merciless whim add up to one bad work environment - and one shocking boss. Maybe he paid well (I doubt it). Some might be tempted to approve of this stupidity (eccentric tycoon and all that), but he's Labour's small business "champion", for pity's sake. He's doesn't inspire people, he bullies them into submission.

Sure enough, what's now becoming crystal clear is that the way he ran his workplace has been transferred to the way he "champions" small businesses. "Stop moaning," he barks; "Most of these businesses deserve to go under," he moans, etc. His style of brutality might have made him some money in the 80s, but, a talent for making himself money apart, his neanderthal attitudes and fundamental ignorance won't help British private enterprise to be successful during Brown's bust in the noughties and beyond. For that reason, he should be out.

But, hey, you know, what goes around comes around. I think it's called 'karma'. It seems Sugar's saved up a hell of a lot of bad luck. And so has Brown.