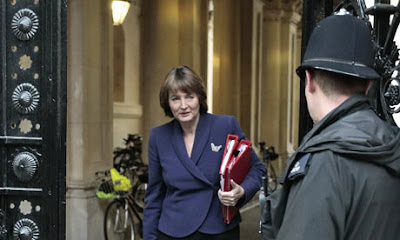 Just heard on the way home this evening that Harriet Harman is to face charges for driving without due care and attention. You will recall that she was using a hand held mobile phone when she bashed into someone and then left the scene of the accident without reporting it (no sign of charges for that particular bit of hit and run). Most news outlets have omitted to mention those last details, but hey ho, at least there's a chance of some justice against this venomous harridan - if only for her automotive sins. But I won't be holding my breath.

Labour deputy leader Harriet Harman faces prosecution for her involvement in a car smash in which she was allegedly using her mobile phone, the Crown Prosecution Service has said.

A court summons will be served on the MP for Camberwell and Peckham after a police probe into the crash in Dulwich, south-east London on the afternoon of July 3.

Ms Harman, who denies the allegations, is accused of driving without due care and attention and driving while using a hand-held mobile telephone, the CPS said.

A spokeswoman for Ms Harman said: "Ms Harman strongly refutes the allegations and will deny the charges."

She was banned from driving for seven days and fined £400 after admitting speeding at 99mph on the M4 near Swindon, Wiltshire, in January 2003. Ms Harman was said to be taking her son back to Bristol University after the Christmas break.

The penalty, which was criticised by motorists' organisations as too lenient, was issued just as it was announced that court fines should be more closely linked to offenders' incomes.

She was also fined £60 and given three penalty points for exceeding a temporary speed limit in Suffolk in April 2007.

After studying politics at York University, Ms Harman qualified as a lawyer and went on to be Legal Officer at the National Council for Civil Liberties.

Driving without due care and attention carries a maximum fine of £5,000 and an endorsement of up to nine points on your licence.

Seems she's got form. I do hope her previous transgressions are taken into consideration when she's fined the maximum sum and stacks up the points - or, preferably, is sentenced to a few days' in stir. That's what would happen to you or me, after all.