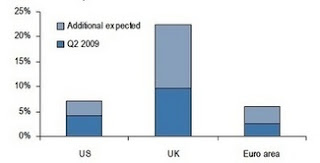 The Royal Bank of Scotland. Bailed-out by the government with $71 Billion of our money - by far the biggest bank rescue in the world - and now to be asset stripped at the behest of Brussels right at the very bottom of the market. And this is just one banking example in the biggest British bust of all time.

The result? Well, you may ignore the bluster, the spin and the lies from our catastrophically incompetent Labour lords and masters. The result will be that British banks will lose more money than any other banks in any other country in history. The price of Brown's failure as Chancellor before his crash, and as Prime Minister after it, is there for all to see in the graph. As Mark Bathgate notes just now in the Spectator, the losses could be, according to the IMF, as much as 25% of Britain's entire GDP. That's more than three times the next most exposed country, the USA. This is, quite simply, the biggest financial disaster in British history. And it happened on Brown's watch. Thanks to Brown's overweaning arrogance and incoherent regulatory system married with, of course (inevitably), his total mismanagement of the public finances, a large but managable adjustment, which is what it would have been under a Tory government, became a meltdown - and it's not over yet.

Anyone, anyone who thinks voting for Brown in the General Election is a pretty neat idea should have their polling card confiscated. Why? Two reasons: 1) They represent a clear and present threat to the future recovery - existence even - of the country, and 2) They're obviously mentally impaired.

Anyway, Bathgate's brilliant article is worth quoting in full:

Two years after Northern Rock became the first bank failure of this crisis, another £30 billion of taxpayers’ money needs to be thrown at the banking system. Behind all the noise about improving competition and the European Commission lies one core fact: the UK banks have lost an astonishing sum of money. The above chart shows bank losses as a percentage share of GDP, and illustrates the scale of the crisis that has overwhelmed the banking system and the taxpayer. The IMF estimates that losses could be as high as 25% of UK GDP.

UK banks went on an orgy of lending around the world, becoming the biggest source of credit growth in many countries. RBS trebled its total lending in just three years, expanding its balance sheet to almost 1.5 times the size of the UK economy. Egged on by Gordon Brown – in whose tax receipts he felt he had found the “New North Sea Oil” to fund an ever grander government sector – money was thrown in almost every conceivable direction. In common with their cheerleader Brown, the banks decided there was no reason to worry about the day when the economy could decline because ‘boom and bust’ had ended. This led to many UK banks – the largest lenders at the height of the boom – facing the downturn with the lowest bad-loan reserves and the weakest liquidity position of any banks globally.

The list of bank failures that started with Northern Rocks is now long: Bradford and Bingley, Singer and Friedlander, Dunfermline Building Society, RBS, Lloyds, HBOS. With over £30 billion handed over today, the direct cost for the taxpayer approaches £90 billion, with no certainty of these sums being recouped. On top of this, there are still over £1 trillion of other subsidies being provided to these banks and others who have not needed direct bailouts, like Barclays, to try and hold the system together. This is not the end of the bill – most people will have noticed overdraft charges rising and the gap between mortgage rates and the Bank of England Base Rate soaring. UK banks have increased their margins to UK customers to pay for their losses. This is one of the key reasons that the UK economy remains, alone among the major economies, in recession. It’s not smart economics to refund the taxpayer the cost of the bailout by simply ramping up the costs of banking to the same taxpayer.

The UK bank crisis ranks as one of the most serious shocks to hit a developed economy in the post-war period. The scale of bank losses may even eclipse those of the Japanese banks in the 1990s - losses that cost the Japanese economy more than a decade of growth. Fixing the problem is every bit as important as addressing the government debt crisis, and will likely be the difference between stagnation and recovery.

"Egged on by Gordon Brown..."
True and absolute proof positive that if the bankers are the guilty ones for causing the actual crisis, on Brown's head rests the political guilt. He has yet to be brought to book for his crimes, as have many of those self-same bankers, at HBOS and RBS particularly, most of whom are Gordon's knighted chums. I think those facts are related. Don't you?
Posted by Jon Lishman at 11/03/2009 07:11:00 pm