Wake-Up Call: "The Pound Never Stops Where You Want It To" 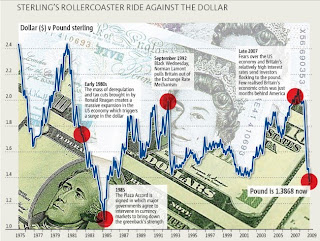 ying to hear the odd expert voice in the forlorn darkness of Labour's Keynesian nightmare warning the people of Britain to wake-up and get real about the true, truly terrifying cost of Brown's bust and consequent economic crisis, or risk going down without a fight.

Ambrose Evans-Pritchard, who is, I still believe, one of the many MSM fans of hairbrained Brownomics, filed this report for today's Telegraph on a timely speech made by former FSA boss Sir Howard Davis to the clients of one of Britain's two remaining solvent banks.

...Britain faces a dangerous rise in the levels of public debt – even taking into account tax increases planned for coming years [according to Sir Howard].

"The next six months are going to be extremely delicate in the UK", he told a gathering of HSBC clients in London. "It is very clear that something dramatic has to happen to control spending: but is the economy robust enough to survive fiscal tightening?"

The Government is already running out of weapons to fight the crisis. While the fall in the pound has helped boost exports and proved benign so far, Sir Howard said that past experience handling sterling crises had taught him that the matters can turn ugly fast once confidence is lost. "The pound never stops where you want it to," he said.

What is disturbing is that the British people seem unwilling to face minimal belt-tightening. Even professors in higher education are balloting to strike, demanding a continuation of boom-time pay raises. "You have the best minds in the country planning to go on strike for 8pc. People are miles away from understanding what is needed."

Polling data shows that 48pc of the public are against any spending cuts and only 20pc see the need for retrenchment. Britons appear to assume that the "fantastic growth in public spending" over the last decade has become an entitlement.

Sir Howard said the reality is that the Government has so far come clean on just half of the fiscal consolidation necessary over the next five years merely in order to stabilize debt. By 2014 we will be among the Big Four of global profligates. "It is not a great club to be in," he said.

Oh, I don't know. Brown doesn't seem to mind what club he belongs to, so long as he's in it. Trouble is right now, he joins and we all join.

It's the currency, stupid, which is in slowmotion freefall because of the levels of borrowing and spending, stupider, which itself will lead to years of stagnation and economic and social decay, stupidest.

Stick that in your Brownite pipe and smoke it, Blanchflower.

Anyhoo, while he gets on with that, the rest of us should just ignore the moronic Labourist politicians, ultra-useless leftwing economists and their tame, pet journalists and bloody well wake up!
Posted by Jon Lishman at 10/16/2009 12:14:00 am