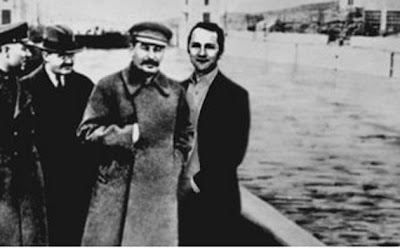 This photograph of a shadowy figure (right), thought to have been murdered (politically) by the most wicked dictator in British history, Gordon McStalin (centre), an act carried out by his right hand henchman, the evil Baron von Mandeltov (left), and hitherto forgotten after the final fall of the 13-year oppressive Labour dictatorship (a period now known as "The Great Error"), was unearthed from recently discovered archives yesterday by celebrated political historian Prof Sir Arthur Weevil of Oxford University. He said:

"I believe it's a minor commissar named Nicholai Burnell, or something like that. References show that he was initially a run-of-the-mill, almost invisible apparatchik but turned to opportunism and self-promotion when McStalin was approaching his downfall and was in a severely weakened state following The Great Bust of '09. I believe he resigned in that year in an ill-judged attempt to seize power. He hadn't counted on the scheming and shifting loyalties of Mandeltov, however, and was left isolated when Mandeltov fell in behind the ailing dictator.

"After that, not much is known about him. Oh, there are a few documents lying around, some of which he even wrote on his own. It seems he fancied himself as some sort of political philosopher, but I've found no evidence of any book or what could be regarded as a legitimate academic paper written on the subject by him anywhere, so I think we can dismiss that as mere self-promotion too. The media of the day, especially the non-Party approved, dissident press, appeared to swallow it quite readily, however, which is rather curious, don't you think, given that he disappeared from the political limelight altogether soon afterwards? Some believe he ended up in the oil business, but I suspect he came to a more, shall we say, colourful end (he went into broadcasting, just like Count Mickael Portillov, of the Old Dynasty, before him). It's ironic, really, that he should have been airbrushed out of a McStalin picture in this way, since he was well-known for airbrushing himself in to pictures when he was late for appointments (which he often was, apparently). You see the irony there, don't you? No? Oh dear." 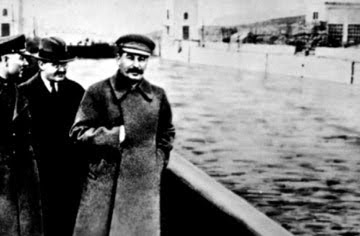 "Do you see what McStalin has done here? He's erased Nicholai Burnell entirely from the picture. I'm not sure exactly why he used to do this, but apparently he would spend hours and hours by himself removing people that he didn't like from pictures throughout the entire three-year period of his dictatorship. In fact, he became something of a master at doctoring photographs, among many other things, in the final months (known, as you will no doubt recall, as the "Months of Madness"). Apparently, in between his increasingly frequent rages, this would help to calm him down. Sometimes, he would even become lucid enough for Mandeltov to allow him out in public. In fact, it would be fair to say that without the soothing activity of scratching out his enemies from pictures all the time, which seemed to carry some sort of important symbolic significance for McStalin, he would have fallen far sooner than he did, more's the pity."

When asked whether he thought McStalin was actually mad, Prof Weevil replied:

"Well, it's not a very scientific term, but the answer is, oh yes, most certainly, especially towards the end. As a march hare."