Brown To Wales: You've Never Had It So Good

Fraser Nelson, who finally appears to have twigged that another five years of Labour would probably be a Bad Thing, has posted on Brown's latest nonsense address to the Welsh Labourists. In it, Brown seems to be suggesting that Wales has never had it so good than under Labour, citing the creation of 100,000 phantom jobs and talking, laughably, about his own family's 'poverty', though he has to go back eighty-odd years to his grandparent's generation to find at least the suggestion of it. Nelson gives the lie very effectively to this complacent, vacuous claptrap, and to Brown's murky Welsh job creation figures.

Gordon Brown does not have much of a personal “backstory” but he does talk about his family. When he’s feeling guilty about something, he mentions his father. But today, speaking to the Welsh Labour Party, he again talks about a figure we heard about a few days ago: his grandfather.

“Like so many here I come from a family whose grandfather went without work during much of the 1930s. A grandfather whose small savings gave his son, my father, the chance of an education, the first in our family to go to university. And the lesson of those days is that even in the worst of times families helped each other, supported each other, came to the aid of each other through thousands of acts of friendship caring and support. And that reveals the most important lesson of all; that it’s not markets that create morals: morals spring from the compassion of our hearts”

Given how utterly unremarkable it is to have grandparents who had a tough time in the 1930s, one can only presume that Brown’s aim is to contrast this with Cameron’s grandparents. But playing the “poor family background” card really is pushing it. As a Church of Scotland minister, Brown’s father was in a position to give his family a very comfortable life. Brown simply does not have a poverty song to sing.

Most strikingly, Brown tries to tell Wales how good they’ve had it under Labour with 100,000 more jobs. But, as nationally, how many of these were imported? Surely matters is to what extent economic growth helped those on benefits in Wales. In its case, not very much – as the below graph shows (data from DWP) 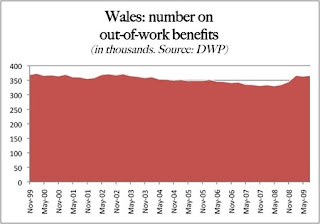 On the one hand - the 1930s - I can confirm that Nelson is absolutely right. My great grandfather on my dad's side was a timber salesman in Cumbria. During the Depression, he could only afford to send one of his two sons to university. My grandfather, being the youngest, drew the short straw. Fortunately for him, however, he excelled in school and managed to win a place with the Civil Ser 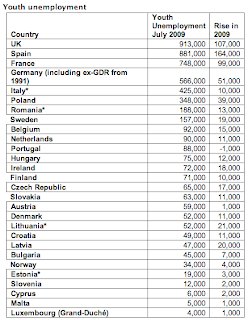 vice, where he enjoyed a long and pretty illustrious career. The only hand-up he'd ever had was a decent education in a selective school. I wonder how he would have fared in Brown's Britain. Mickey Mouse GCSEs followed by Mickey Mouse A-levels followed by - well - followed by nothing. Britain has the highest levels of youth unemployment in Europe (see chart left).

Which brings us to Brown's second laughable claim, this time about Welsh jobs and how 'good' life is in Wales thanks to his largesse with taxpayers' money. The graph to which Nelson refers tells us all we need to know (see above). In terms of benefit dependency, things have only got worse in Wales. Nelson is also right about Brown's pie in the sky jobs figures. If they have been created, then they've been imported. While their numbers have certainly thinned over the past 12 months, and while I am very pleased to count some of them as friends, including my next door neighbours, the fact is that the torrent of Polish immigration to my own town sucked up any spare, low-paid jobs. Mind you, the real reason for this is, if the Poles I know are anything to go on, that they have a powerful work ethic entirely absent from the psychology of your average, undereducated young Welsh man or woman, and this syndrome is repeated throughout Britain.

Poles depend on work in the same way that a large portion of Welsh men and women depend on benefits. Brown and his ilk depend on the latter's votes - and straightforward lies - to maintain power, so the likelihood is that he will want to keep it that way, however morally bankrupt the arrangement clearly is.

So it's certainly time for change in Wales and while I am an ardent Conservative, I am also a realist. The Tories aren't part of the political landscape in this part of the world. They aren't even on the radar. So I will be voting Plaid Cymru in the general election. A tactical vote, I freely admit, but not a wasted one if it helps to kick out Labour from government, and Brown out of Number 10. I am also a bit of a fan of Elfyn Llwyd, who is one of the most impressive figures in Welsh (and Westminster) politics. And I'm a fan of Plaid generally, even if I can never agree with one or two of their policies concerning the future of the Principality.

The point is, all the people I've spoken to over the past year in this part of Carmarthenshire appear to have reached a similar conclusion. They're all ready to send Brown a powerful message about just how 'good' they think it's been under his trainwreck regime, and, in many cases, how totally betrayed they feel.
About time.
Posted by Jon Lishman at 2/27/2010 04:50:00 pm