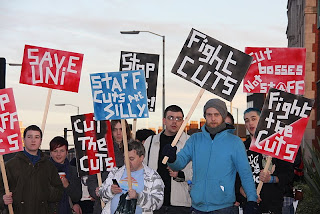 We've just been treated to a ten minute, free Party Political Broadcast on behalf of the Labour party, shown simultaneously on the BBC and Sky News. In it, the man who by-now people everywhere must be thinking is the prime minister, Lord Mandelson, accused the Tories, among other things, of having economic policies that were in "disarray" were "unravelling" and were "confused". We all know that this is a fine example of the familiar Mandelson mendacity technique: strike out at your opponents by accusing them of suffering from your own weaknesses. Just to be clear, it is Labour's economic policies that have been "confused", have been "unravelling" and have been in "disarray" ever since Brown's mega-bubble was pricked and burst all over him (and us) in 2007. We've been in recession for 18 months, a post-war record, following ten years of debt-fueled growth and now the "signs of recovery" that Mandelson slimed and slithered about are either in areas that have been artificially boosted with deficit spending (will vanish, in other words, when the cash runs out) or simply aren't there. Manufacturing overall kept shrinking in the last quarter, for God's sake. And Mandelson has the barefaced cheek to lecture the Tories on economy. But that's the point, he is that brazen. But he is not unbeatable, even if the Tories are that pathetically scared and/or in awe of him. For one thing, when Mandeson is pinned down on detail, as Ken Clarke proved the other day, or on philosophy and underlying principles, he squirms and looks very dodgy indeed.

But there are two other points to make about this: if Sky and BBC are going to collude with Mandelson and his Labourist media managers in abusing the law of the land over party political broadcasts, then they should face sanctions. If they have merely been duped into covering - live - what they were presumably told would be a policy announcement but then turned out to be an utterly partisan assault on the Opposition (and Cameron personally more than once) and, as such, was a clear breach of rules, then someone needs to be disciplined or fired for being so damned stupid. And Labour need to be brought to book instantly for it. This must be nipped in the bud. The BBC, particularly, is not Labour's personal advertising service. And neither, for that matter, are any other channels. Given the huge surge in government advertising since the New Year, you'd be forgiven for thinking that this Labour government was really a giant, publicly-funded advertising agency, rather than merely a bunch of socialist incompetents desperate to cling on to power, and who will stop at nothing - and break any rule - to do just that.

Speaking of socialist incompetents, that brings me to the second point. David Lammy was on the BBC just after Mandelson had wound up his ten minute Labour party political special. His brazen lies about university cuts were worthy of the lizard lord himself. He talked about 5% cuts - and then decided that wasn't a big enough lie so he then contradicted himself and said that spending on universities was, in fact, still going up in this "growth cycle". There were other, equally awful, exchanges with Lammy accusing the universities (and the media, laughably) of "scaremongering" over the potential loss of 200,000 university places this year, as a direct result of government cuts, claiming, absurdly (175,000 failed to get in last year), that places were going up! He had the usual dig at Major's Tories ("leaky roofs") in spite of the fact that universities were booming by the time he was shown the door - but that's ancient history now.

But Lammy was lying - and I have proof. My own university, for whom I work and in which I study, has had to up its projected level of cuts for this year from 15% to 17.5% as a direct consequence of government policy. It has already fired a number of senior lecturers, suspended building projects, abolished an entire department but must go much further to meet the enforced target. The university must find other ways of meeting these desperately deep spending cuts, though, and one of them is by expanding its private operations and income. It does this by opening its doors even wider to foreign undergraduates. By bringing in more and more and more overseas students (one third of the student body is now foreign, it is thought), however, post A-level British pupils are left at a severe disadvantage. Hence the fears that 200,000 British young people will not be able to find a place this year.

So it's not scaremongering, as liars like Lammy would have you believe, you see. These fears are grounded in harsh reality, a harsh reality of a stealthy squeeze on spending by Labour, which, quite simply, they have lied about and are lying about. So you see, the real, Mandelson-style "choice" is between Labour cutting and then lying about it, and Conservative cutting - but telling the truth about it. Deceit versus honesty; mistrust versus confidence; and, in the end, failure versus success - Labour versus Tory. Simples!

"Now for change"? You bet. And, in point of fact, given the total invisibility of Brown this weekend, it looks like there's already been a change at the top of the Labour party. Mandelson will be the face of the campaign and their chief target will be David Cameron. In which case, Cameron should relax and start smiling again (I used to like him when he smiled). If Labour want to name-check him every other sentence, then who's complaining? It's a sign of real desperation, on Mandelson's part especially, that the best he can do is drone on about his soon-to-end car scheme thing and then wildly claim that David Cameron would wreck the recovery by taking it away (at least, that's what I thought I heard him say).

For sheer bloody nonsense, that one was hard to beat. But then came Lammy...