Election Speech That Said Nothing 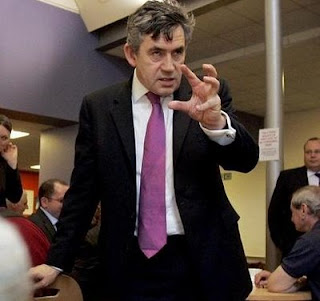 Just finished the excruciating task of listening to Brown's God-awful 'election' speech. It was billed as a "major policy" speech by the BBC. Huh? How does that work? All I heard was "Tories bad - Labour good" over and over and over again. Zero policy. It was truly appalling. He looked what he is: tired, false, uncomfortable and burnt out. He sounded, simply, awkward and uncertain about his words, struggling to read his autocue as he was.

So that's the policy, folks - and the message - and it's pure Brown, and pure manure, namely "we've made mistakes, but the Tories will always be evil." Truly, truly pathetic (and that kind of "look at the alternative" message certainly didn't work for Major in 1997).

But I really think that is the best he can do, in which case, Mandelson and Campell are going to have to come up with an extraordinary campaign where the person who should be the 'star' of the show - the Prime Minister - is kept off the stage as much as possible. That'll be a first.

What's clearly evident, though, after two really unpalatable Brown performances in two days, is that Labour can't go on like that.
Posted by Jon Lishman at 2/20/2010 11:43:00 am