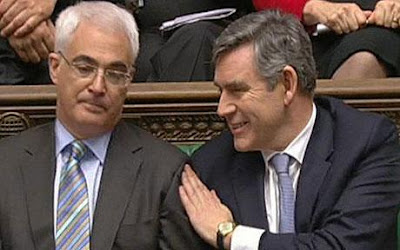 Jeff Randall has done it again. In his latest piece for the Telegraph, he considers his recent, possibly game-changing interview with Alistair Darling, which produced arguably one of the most memorable quotes of the Brown years. You know, the one about the 'forces of hell' being 'unleashed' - by, er, the son of the manse himself. Randall is at his sparkling best in this piece, as this hefty taste will, I hope, demonstrate:

Renewed allegations about Mr Brown’s bullying had surfaced at the weekend, when The Observer published extracts from Andrew Rawnsley’s new book, The End of the Party. The Chancellor knew that he would be facing a few bouncers on the subject, almost certainly on the way that Number 10 had tried to intimidate him in the past, especially after he had predicted in the summer of 2008 that Britain’s downturn would be the worst for 60 years.

Mr Darling was not caught off guard by me. He and his adviser, Catherine Macleod, had had plenty of time to formulate an appropriate response to the issue of Mr Brown’s bad temper. In the event, they went deliberately for the explosive option, a decision that would have been endorsed by the delightful Maggie Darling, the Chancellor’s bubbly but determined other half. This was revenge at its most delicious: a platter of cryogenically modified resentment. From now until the election, and almost certainly beyond, Mr Brown’s cabal of slime merchants will be branded as the doers of the devil’s work: Forces of Hell, the Inferno’s Enforcers, Satan’s Storm troopers. The son of a preacher man has, it seems, been employing the wrong crowd. After the interview, Mr Darling and his Treasury team accepted my offer to stay on for a few drinks. Over a glass of chablis and a bowl of Doritos, he chatted confidently about the task of reducing the United Kingdom’s unprecedented deficit. As we discussed the choice between lower spending and higher taxes, Miss Macleod’s BlackBerry was glowing like Chernobyl. The fallout had begun, yet the Chancellor seemed entirely unbothered. I inferred from Mr Darling’s equanimity that he has accepted his fate. For him, the Downing Street game is nearly over. Even if Labour were to pull off a remarkable election victory, securing another overall majority, the chances of him being invited to remain as Chancellor are slimmer than a collection of Mr Brown’s witticisms. In the unlikely event that the Prime Minister finds himself back in charge, you can be sure that only loyal Yes Persons will be rehired.

Thus, Mr Darling has nothing to lose. He is unsackable before the election but, in political terms, unemployable after it.

This is why I like Randall so much, not just because he is always clear, illuminating and knows his own mind (a mind I more often than not totally agree with), but because he is fair, tough-but-amiable and, above all, lays almost 100% of the blame for grinding the British economy into the ground squarely at the door of the self-aggrandising weirdo wrecker, Gordon Brown. And rightly so.

Anyway, I won't go on - read it for yourself; it's certainly worth it. But be warned, Randall ends the piece on an ominous note about the true state of the public finances and the real scale of the Brown catastrophe that awaits the next government:

When near-bankrupt companies are taken over at the 11th hour by fresh management, it is often the case that their numbers are far worse than we had been led to understand. In desperation, dodgy directors try to hide the full extent of the horror in the vain hope of bluffing their way through. That is what Labour is doing to UK plc - and very soon its bluff will be called.

So don't believe the hype anybody (not that you do, of course). Whoever wins, things can only get tougher.