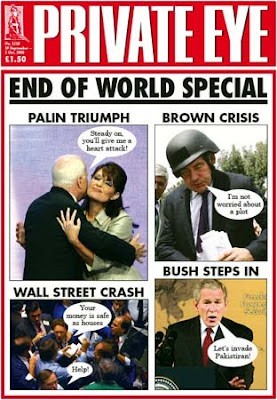 This extraordinarily bad article appeared in the latest edition of Private Eye:

Former chancellor Lord Lawson may lead Britain's climate change sceptics but the movement's John the Baptist, its bearded mystic who has long preached in the wilderness, is former Thatcher aide Christopher Monckton. "Mad Monck" (whose sister Rosa married Lawson's son Dominic) is actuall ythe Viscount Monckton of Brenchley, although given that most hereditary peers have been removed from the House of Lords, Westminster is deprived of the Mad
Monk's iconoclastic, right-wing views.

But hark! Having quit the Tory party, Monckton has joined UKIP and he popped up the other day at that party's campaign offices in SW to present UKIP's "climate change statement". The meeting was held in a small room which, paradoxically, soon became unbearably hot.

The event attracted a small crowd of reporters and UKIP supporters. A fat man in a bow tie parked his buttocks in the front row. Another fellow was dressed in a dinner jacket (the meeting began at 3pm) with torn trousers. Also present was a European aristocrat, an inoffensive flower who was hailed as "Her Royal Highness the Duchess of Oldenburg". She uttered not a word.
UKIP leader Lord Pearson, who was incautiously wearing both a jacket and a sweater, chaired proceedings with the help of one of the party's MEPs, Godfrey Bloom. He sported a florid yellow hanky in his top pocket. The launch was being photographed from the side by a tall man with a ponytail, later identified as UKIP's new campaigns supremo.

Pearson apologised for the fact that adverts for the meeting had stated that "Global Warming Is Crap". He said the last word should have been written "C.R.A.P." – as in "Carbon Really Ain't Pollution". Ho ho!

Bloom now took the floor for a minute or so, placing his hands on the top of his arse, throwing back his head and saying: "I'm not a scientist but it is our job to assess information – yes! assess information!" He called climate change "one of the greatest confidence tricks the world has ever known". And then sat down with violent suddenness.

Now came the main event: the Mad Monck. To call his long speech "swivel-eyed" would be both unkind and inaccurate, for the most prominent thing about this onetime Fleet Street leader writer is the way his eyes do not swivel but bulge. He has the appearance, if not of Marty Fledman, of an indignant raven. He proceeded to peck his beak at the climate change theory and the vast apparat of scientists and lobbyists which has grown up around it.

"My lord, Duchess, ladies and gentlemen," he began, staring at the motley crew of deadbeat hacks and supernumeraries, some of whom were visibly wilting in the heat. Pearson, in
particular, was soon sweating hard. Monckton addressed him as "my noble Friend". Oh, how he grieves for that seat in the Lords he never occupied.

He proceeded to describe how recently he found himself discussing climate change with Tory policy chief Oliver Letwin and Letwin allegedly told him: "We cannot question what the scientists say." Monckton concluded that "you might as well resign and let the men in white coats take the decision for you." Men in white coats? Just to be clear, he was referring to scientists.

Over the course of the next 45 minutes, Monckton spoke crisply, without notes, about his distaste for the EU, the "zitty teenagers the United Nations uses to concoct its climate models", the "clunkers" who believe that biofuels will save mankind, and the plans of Al Gore, Angela Merkel, Jacques Chirac and others for "world government".

There were fluent tales about the Australian curly malice tree, "a strange kind of eucalypt which only grows on Dolomitic rock". Monckton, adding some stuff about calcium and magnesium, used it to make some elusive point about geology in the pre-Cambrian era ("ah yes, I remember it well," he japed) and carbon dioxide. From time to time his talk was peppered by a variety of jokey ringtones from people's mobiles. Pearson, now bright red in the face from the heat, made plain his disapproval.

Monckton laughed off theories that Himalayan glaciers could disappear by 2035 or that polar bears could be in peril. He called for cheaper beef burgers for the poor of Haiti and, while assailing the "eco-fascist agenda", described how he and a scientist called Herr Ziegler had been denied access from official symposia on "this fantasy, this chimaera, this will o' the wisp" of global warming.
Although Monckton undoubtedly came across as something of a "strange kind of eucalypt" himself, his certitude did have a certain magnificence. Can we not admire his readiness to stand apart from the stampede? The only moment he stalled was when a freelance hackette asked him about an incident in Germany recently when he compared the behaviour of some protesting climate changers, one of whom was Jewish, to that of the Hitler Youth.

Monckton soon recovered his composure, however, and claimed that an unidentified top Tory recently told him "none of us really cares much about climate change". He then launched on a homily about how salt was good for you and how, in his days at Downing Street under Mrs T, he had often had to see off theorists seeking government money for "pseudo scientific boondoggles".
At which point the Eye made its excuses and left, if only to cool down after all that hot air in the room.

This anonymous, snearing, personalised hatchet job can be condemned in so many ways, it's hard to know where to begin. So I'll limit this to just one point (sort of). It's not so much, for instance, the bafflingly high level of contempt the author, calling himself (although it could very well be a her), 'Gavel Basher', apparently harbours for Christopher Monckton that concerns me; there is very little evidence in the piece that might suggest he/she had the faintest idea who Monckton was before s/he put digits to keyboard. Or the fact that any of the bio-background included could be found out in five minutes by a quick search on Wiki - and a skim through any out of a hundred blogs (you know, the form of internet activity the Eye regularly rails against for whatever reason). And it's not the embarrassing, lazy ignorance of the piece on the detail of the climate scandal that Monckton is merely highlighting (no mention, for instance, and perhaps tellingly, of the fact that the IPCC itself has admitted the 2035 glacier annihilation date was out by a factor of ten - that the original document said 2350, not 2035. Even the Guardian got this right). It's also not the scattergun nature of the article's mindless abuse: first the audience, then the head of UKIP, then Monckton, then UKIP again, then the audience again, then back to Monckton, and so on.

It's none of these things. In fact, anyone reading the piece without the first idea who Monckton was and who doesn't like UKIP one little bit, but who has half a brain and follows a couple of newspapers and websites, will know that it's unpleasant, arrant nonsense from start to finish. So what particular aspect is it that I find the most revealing about just how bad an article this is? Well, I'll tell ya. It's that it is just so very dated! It's like some refugee hack who used to work for some dusty old rag or other has decided to get involved with 'all this climate kerfuffle'. You know, the conversation probably went something like this:

Ed (Arkala Hislop, we presume): What's all this nonsense about climate change lies I've been hearing about? I thought all that stuff was settled: we're destroying the air, or something, aren't we? Everyone says so.
You there, Gavel Basher, get down to that Monckton talk and see what you can find out.
Gavel Basher: Climate what?
Ed: Climate change.
Gavel Basher: Oh, right. I thought all that stuff was off limits. "Scientific consensus" and all that.
Ed: Just what I was saying. But there's a UKIP angle here. And a nutty rightwinger, Tory split one, too. It'll make good copy. Look, just get over there and see what crap this Monckton's spouting, and the kind of people who're listening.
Gavel Basher: Lord Monkey?
Ed: Monckton
Gavel Basher: Never heard of him.
Ed: You know, that science SpAd who used to work for Thatcher. The Viscount, or whatever he is. Just Google him. And check out a few blogs. They usually have some good stuff on this sort of thing.
Gavel Basher: (blank look, pause) Can't you send someone else?
Ed: No, you're supposed to do the fringe stuff.
Gavel Basherb: Bollocks. (picks up handbag and storms off)

You get my drift, I hope.

This hypocritical smear, as with most smears, is badly researched and pathetically prejudiced. But this one also has the dubious distinction of being totally out of touch with the zeitgeist. A bit like Private Eye itself these days, actually - and increasingly. I'll still buy it for the time being because I like Colemanballs and the letters and some of the local government stuff, too. But I have a funny feeling that that choice might be taken out of my hands relatively soon: I'm pretty certain that on the 'strength' of this piece of rubbish, among a lot of other fairly recent evidence of decline, that this once august, satirical, cutting-edge investigative organ will go the way of Punch. It'll be missed, too - for a few minutes. And then it'll become just another fondly remembered artifact of a bygone age: the age of the Mainstream Media establishment to which the Eye so clearly and firmly belongs.

PS: At any rate, I would have thought that this magazine would have been keen to get a bit of mileage out of the perverse corruptions of the brahman former railway engineer currently in charge of the IPCC with highly dubious links with that scourge of British industry (but close friend of this Labour government), Indian megacorp, Tata. Or, perhaps, the various carbon scams that have been going on all over the country for a decade or so now, and which have cost us billions. Curious editorial line, this satirical dinosaur has.
Posted by Jon Lishman at 3/13/2010 03:17:00 pm