Where's A Semi House-Trained Polecat When You Need One 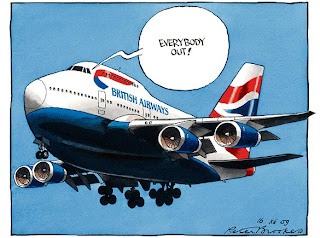 Earnestly deploring a strike is quite different from dispatching a semi
house-trained polecat against the pickets to save a business and its workers’
livelihoods.

This is a David Blackburn quote about Brown's latest bout of dishonest dithering, this time over a real doozy of a conflict of interest for Labour over the BA/Unite dispute. The dishonesty is not all on Brown/Labour's part, however. Both Unite and the BA management appear to have been trying to outflank each other for months, and, insodoing, (by behaving like Brownite Labour cabinet figures rather than professionals, in other words) have buried any trust that might have been possible between the two sides, and probably buried the company with it. Bad management and aggressive, untouchable unions. It's 1977 all over again.

Meanwhile, Brown is paralysed - as usual. He can't intervene because 'Unite', one of bankrupt-Labour's life support machines will...well, who knows what they will do. Try to take over, probably. He also can't not intervene, because, if these strikes go ahead, then there's a real chance our loss-making national carrier will be doomed, just like KLM and JAL in the past 12 months or so alone. The job losses would be horrendous, and that's before we mention the national humiliation. (I feel a bailout coming on. Pardon me).

All this merely serves to illustrate with absolute clarity why, in a time of economic crisis, you cannot have a government as weak, contaminated and compromised as this one in charge of anything - anything at all. They are powerless to make policy, and if they do make policy, they are then powerless to enforce it. Brown's government is knackered, and Brown himself has been politically neutered. You need a new government, mate. Immediately.

With a crippled Labour government limping along, lurching from one crisis to the next, it's becoming clear for all to see that the unions see this as their latest big chance to undermine democracy and seize a sizable slice of power for themselves. They've done it before.

All the more reason why Blackburn is right. The semi house-trained pole cat would no-doubt have all his crown jewels in tact, and be free to act independently. He would be ready, willing and able to tear into the old trots of the unions, more interested in the dictatorship of the workers than those workers' livelihoods as they are, and make sure they're made to remember once more that, for better or for worse, the government that we elected runs this country, not them.

Lord Tebbit: over to you, sir.