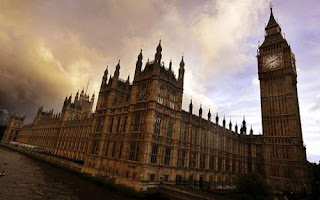 Thanks to Iain Dale's heads-up, I've just seen what I think should and could be a politically game changing post by John Redwood on his blog. I say that because it made me realise, to my shame, that I've been as taken in by the Labour revisionist narrative on the economics of the Thatcher years as virtually everyone else has (and I dare "everyone else" to say otherwise). It's potentially game-changing because, for one, rather important thing, it's all evidentially true.

One of the myths perpretrated by Labour and the BBC is that Margaret Thatcher came in and cut public spending. She did not – spending on the main services grew rapidly under her control. She did cut plans in 1981 to help the recovery, but the overall figures for total public spending including capital, current and debt interest were:

(These are all cash figures taken from the Red Books of the day – they also represent rises in real terms, though on a much smaller scale than the cash increases)

She tackled the deficit and the need to fuel growth by asset sales in the middle and later years, and by better control providing better value for money. She also got the high rate of inflation down which she inherited, and put through crucial trade union and nationalised industry reforms.

Margaret Thatcher had no need to cut public spending by the £39 billion Labour now say they need to reduce it by,(or by the then equivalent) because she ran things more prudently and did not borrow so much.

I do wish the commentators and interviewers wouold look at the numbers and the published facts, instead of all this misleading spin. They could also point out that say a 10% per cent overall cut over 4 years is a very modest cut by private sector standards, and has been delivered by many private sector companies with no dimunution in quality of service.

It is also an immutable law of public sector reform in the UK that Labour spin doctors and some BBC journalists will wish to keep alive the myth of the massive “cuts” of Margaret Thatcher, and the myth that all cuts are damaging if not politically impossible.

It's so obviously time for a new Conservative government because it's so obviously time to get on with reversing the dire consequences of the devastating new Labour decline. Watching that little weasel Liam Byrne on Question Time just now, the first part of whose incoherent outgas was to whine incongruously that it's time "to front up" to the economic disaster confronting Britain (that his party designed, facilitated and delivered), simply reinforces the fact that, astonishing though it might seem, his own second point was entirely correct, though not quite in the way that he intended (surprise surprise): we are faced with a "clear choice" between Labour and the Conservative Party in the general election. That choice amounts either to more of the same under Brown, or an honest attack on Brown's economic crisis under the Tories.