National Care Service? Not In My Lifetime 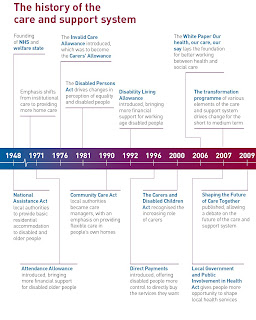 Listening to Andy Burnham on the way to work this rainy Tuesday morning was one of the less pleasant experiences of my life. What a load of tosh that idiot spouts, and in that ridiculous yob voice of his. I've never heard such a giant stream of steaming waffle, hissing piffle and stalling widdle in my entire life!
Life! Ah, life. Yes, indeed - life. As in 'long life' - and getting longer. My five year-old nephew, so we are told, can reasonably expect to live to the age of 100+. However, I think that figure could be even higher. The generation of my family born at the turn of the last century almost all died in their 80s. What is more, we read today that a horny old goat (who is 75) has just impregnated a woman.

It wouldn't be unfair to imagine, therefore, that with medical technology advancing at the rate it is, my nephew, who will hit the royal telegram age in the year 2104, can 'reasonably expect' artificial organ replacements, bionic limbs and eyes, anti-aging gene therapy and, above all, a cure for cancer. And every bit of it will be available on the NHS (honest). With all that intervention, he can 'reasonably expect' to live until he's 200 - and actively, too. He could be the first centurion daddy.

So what, I hear you scream, is the point of all this? I will tell you. The point is that the problem of care for the elderly is a problem we are facing now. It's my parents who very soon will need the kind of care that only children and expensive professional 'carers' can provide. There are elderly people now who are on their own and struggling to cope, or have lost their life savings and equity to pay for the privilege of being neglected in some dump of a care home. (This was the result of one of the most iniquitous laws ever passed, in my view. But that's another story).

It seems to me that all I heard from Burnham was a piece of pisspoor procrastination on a social issue that he doesn't seem to get (well, he's only young himself). Let's set up a commission and see what they say in five year's time, he suggested. Thank the Lord for the Big Ideas, eh readers? So, after his Death Tax suggestion was rightly rubbished, and ruled out by Darling, this whole thing appears to have been kicked into the very long grass by Labour, simply because it's too big a challenge for them to confront.

The Conservatives, by contrast, have a plan that can be implemented now. Lansley was excellent on Radio 4. Sure, the insurance plan might not help people who are already in old people's homes today, but it would certainly help my parents, who are heading in the same direction; give it a decade. By the time they need it, the system would be well-established - mature, even - and well-funded. The Labour grand plan for a National Care Service would, by that time, you can guarantee it, have been delayed, would be billions over-budget and just about to be scrapped. The Conservatives are telling us what's do-able, and how to do it.

So the Tories had better win the next election - if nothing else, then for my parents' sake! As for my nephew, well, he won't be needing a National Care Service. He'll be taking part in the Olympics when he's 150 (in 2154 - I believe they're being held in Kandahar that year).

Don't get me wrong, care where care is needed is a decent idea. But it should be the duty of children to provide that care. That's the real sign of a healthy society. I would expect, however - demand, even - that that sense of duty finally be recognised, and financially rewarded, by a Tory government. As for the State, well, its duty is clear: where there is no alternative, i.e., where there are no close family members who can provide support for their elderly or infirm loved one(s), or where that family, motivated by some form of perverse selfishness, has abrogated their duty and abandoned the needy member, the State intervenes.

Where the care becomes too difficult for the dutiful family, however, that's when the Conservatives' insurance scheme really will come into its own. It is not merely a step in the right direction - and Labour and Liberal Democrats won't even admit that, remember - it is an excellent solution to a problem confronting Britain now. The Lib Dem spokes-idiot said that a similar scheme in France only had a "20% uptake". What the Lib Dem spokes-idiot probably doesn't know (or would care about if he did) is that the other 80% in France look after their own families. Always have, always will. So the problem of how we mend Britain's broken society, where grown-up children turn their backs on sick or elderly relatives, is a separate, massive problem, you see, and one that no fantasy 'National Care Service' is going to fix.

The National Care Service is, therefore, a red herring (surprise surprise). Rather than opposing it with the expression "over my dead body", however, (which seems to be tempting fate), I'll just make a prediction: "National Care Service", laugh out loud. Not in my lifetime. Not in anyone's lifetime, for that matter. Certainly not my nephew's. He won't need the stupid thing.