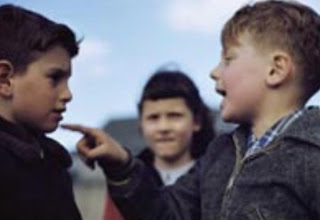 Funny thing. When I was in my early twenties, a long time ago, I used to write the odd poem. Well, not poems as such. Just thoughts really. Anyhoo, after a recent clearout of some old floppy disks, a few of them have turned up - and almost all of them are absolutely awful. Almost. Here's one that I think is actually not that bad.

If memory serves, I was challenged to write it when I was a young schoolteacher by a classroom full of cocky 13 year-olds in about, oh, 1994. Can't remember what they thought about it. I would imagine they reckoned it was 'cheesy'.

War Breaks Out in the Playground

Who hit first? Well I don't know.
It was Mick or Alan or Danny or Joe

All we could tell was all hell broke loose.
We did try to stop it but what was the use?

Well Stevie got bashed on the back of the head.
He went down so we left him for dead.

Mick hit Micky on the end of his nose
And Danny stamped on Kevin's toes.

Micky was all bloody and Kevin got mad;
He elbowed Alan, now that was bad,

Cos then Joe (who'd started it) (he's really tough)
Went straight for Micky and then it got rough.

But Mick kneed Danny, you know, below the belt
And Danny sort of went green and yelped.

Then Mick noticed he was in his own gang -
But as he tried to apologise something went Bang!

Well we all were amazed cos we thought it was a gun.
If somebody was shooting then we'd all get done!

Anyway, everybody stopped (I think they were tired)
And as it turned out a car had backfired.

So they looked at each other and started-up again
Arms and legs flailing in a huge sweaty mass, but then

Mr Smith ran over looking really mad,
What the hell's going on! he screamed, but we were quite glad

Because it was getting pretty ugly there
And we couldn't really stop it - like I said, who'd dare?

Besides it didn't really matter in the end
They all stopped anyway when the bell went.

All of them got up, one by one,
Bruised and battered and quite shaken.

But they shook hands and smiled and dusted off the dirt,
Some were bleeding but nobody was hurt.

Mr Smith stared at them in disbelief
But he just stormed off to everyone's relief.

They headed off to lessons looking cheerful and bright,
Cheers Joe, they said, that was a bloody good fight!

So you see Miss, it's not my fault at all.
I wanted to take part in it but I'm too small.

Look, Miss, I’ve got to go or I'll be late for history
And we're watching a great video on World War Three.