Michael Foot and the KGB 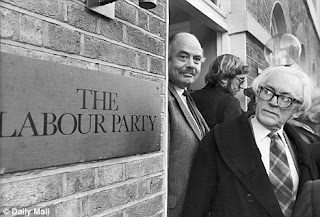 I'm glad to discover I was not the only one to be slightly irritated by the outpouring of revisionist 'grief' over the passing of 96 year old Michael Foot. Charles Moore in tomorrow's Telegraph appears to have reached the same conclusion. The low point was the Neil Kinnock interview on Radio 4, broadcast yesterday afternoon, during which Kinnock drooled and fawned in a way that surpassed even his normal levels of delusion. The old windbag's most dishonest point, however, was that had it not been for Foot, (who, Kinnock suggested, apparently managed to see off the Militant Tendency while being part of the hard Left himself - quite a feat, that), the Labour defeat in 1983 would have been much worse. As a character in The Life of Brian who faces crucifixion stoning (thank-you, Rightwinggit) said, "How could it be any worse!" Kinnock then teased us a little bit by going on in this parabolic hyperbole to state that without Foot's influence, the Labour party 'quite possibly' would have ceased to exist. See? What a tease.

I suppose it's fair to say that one should never speak ill of the dead, given that they can no longer defend themselves by suing you for libel, and I'm not suggesting for one moment that Foot was a nasty man who deserves to continue to be pilloried by fellow bucket kickers in the afterlife for being a card carrying member of the loony left and, despite what we have been led to believe recently was his titanic intellect, a political bonehead. No, Foot was a nice man, apparently - always good to hear. But he was also a very silly man, in my opinion, who, for instance, in his political life, was so uninterested in public opinion - in the mood of the nation he hoped one day to lead - and the public's resolve that should there have to be war with the Soviet totalitarian tyranny, then we would go down fighting - and well-armed, that he lost any of the credibility he seemed to believe he somehow deserved. His decision to put unilateral nuclear disarmament, and disarmament generally, at the heart of Labour's '83 manifesto, to some denoted a man of high principle, but to me merely denoted some degree of fanaticism, incredible arrogance and/or a kind of aloofness from public opinion you would usually associate with a despot rather than a future prime minister.

Which brings us back to Charles Moore, who reminds us that in 1985 the most important defector from the Soviet Union ever, KGB officer Oleg Gordievsky, accused Michael Foot of taking Moscow money and of being regarded by the KGB as an 'agent'. While Foot won a libel case against the Sunday Times for calling him out on this, Moore notes that he never sued Gordievsky himself. I find that pretty telling, too, frankly. Since there was no way for the ST to corroborate Gordievsky's story with another source (the files were all classified - still are), I imagine that's how Foot won the case. However, had he sued Gordievsky, documents proving the accusation might have been forthcoming, especially since the Soviet Union had by then lost the Cold War and collapsed. Suing Gordievsky would have been way too dangerous. Better to sue the Sunday Times, then, and thereby muddy the waters of treachery a bit more. That's politics, British Left style.

Anyway, here's the main bits from this extraordinary - and potentially quite explosive - article:

The obituaries mentioned that, in 1995, Foot won libel damages against The Sunday Times, for saying he had been an agent of the KGB during the Cold War. These accusations came from Oleg Gordievsky, the KGB officer who defected from the Soviet Union to Britain in 1985, our most important Cold War catch. Note that Foot did not sue Gordievsky for his book of memoirs (Next Stop Execution) from which the claims derived

Some years ago, I discussed these claims with Gordievsky. He also told me about the even more serious accusations against Jack Jones, the most powerful trade union leader of the 1970s. After Jones died last year, Christopher Andrew’s official history of MI5 confirmed that Jones had been a knowing KGB agent. Gordievsky was also proved right about other KGB contacts, such as Richard Gott, of The Guardian, who admitted that he had taken “Moscow gold”. Without the benefit of KGB and MI6 files, Gordievsky’s evidence is hard to corroborate, but his record is sound.

This week, Gordievsky gave me his full account. At the end of the 1940s, he said, when Foot was editor and managing director of the Left-wing paper Tribune (he continued in the latter role until 1974), the KGB decided that he was “progressive”. By this they meant that he was sympathetic to the Soviet Union, at that time run by the mass-murderer Joseph Stalin. Their officers in London, describing themselves as diplomats, approached Foot. He readily agreed to see them in Tribune’s offices. There they chatted to him and praised the paper, which was always short of money. They left a £10 note (about £250 in today’s values) in his jacket pocket.

For nearly 20 years, these meetings continued, roughly monthly. Foot did not conceal them, exactly, but they were not publicly known. He accepted the money, which was slipped into his pocket in a way which allowed him to ignore it, each time the KGB came. Foot freely disclosed information about the Labour movement to them. He told them which politicians and trade union leaders were pro-Soviet, even suggesting which union bosses should be given the present of Soviet-funded holidays on the Black Sea.

A leading supporter of the Campaign for Nuclear Disarmament, Foot also passed on what he knew about debates over nuclear weapons. In return, the KGB gave him drafts of articles encouraging British disarmament which he could then edit and publish, unattributed to their real source, in Tribune. There was no protest by Foot to the KGB over the Soviet invasion of Hungary in 1956, and he quite often visited the Soviet Union to a top-level welcome. The KGB classified him as an agent, codenamed BOOT.

Whatever kind of a person Foot might or might not have been in life, in death the charge of 'traitor' is beginning to look like one that could stick, at least in the court of public opinion that people like Foot seemingly held (hold) in such contempt. He, Jack Jones, Tony Benn and a whole host of other hardline socialists at the top of the Labour party at the height of the Cold War are, at the very least, untrustworthy, thanks to their furtive flirtations with this nation's avowed enemy - you know, the country that had a thousand nuclear warheads aimed at our towns and cities. (Though individuals like Foot always believed that was our fault, not the Soviets.)

Charles Moore makes a distinction between what he calls the real 'hard left', which, as he correctly puts it, 'hates everything about our culture and nation and works to subvert both', and the 'sentimental' left, which, he says, Foot belonged to, and which 'while not violent or totalitarian itself, makes endless excuses for those who are. It is full of what Lenin called “useful idiots”'.

I think this is a generous distinction. For whatever reasons, and however naively, you are either a subversive or you are not. Foot was a subversive, not in the sense of radical dissent - that's the very thing our nuclear weapons were there to try to defend - but in the sense of actively aiding the enemy and undermining democratically elected governments, perhaps, in some cases, even to the point of treason itself.

The only question that remains in my mind, consequently, is how many of his stripe and type populate the current Labour government? If the last thirteen years of hell is anything to go by, then the answer is 'rather a lot', though, naturally, people who regard themselves as the 'real' hard left would/will instantly deny this, dreaming as they do of a dictatorship of the workers and one world government under Marx. They would brand people like Foot - and Brown, and, it goes without saying, Blair - the betrayers of the workers and class enemies. (Selling your own country out to whatever tyranny is currently in vogue to them is unimportant, you see).

But thankfully they don't matter, and neither, in the end, perhaps coincidentally and mainly thanks to Margaret Thatcher, did Foot.
Posted by Jon Lishman at 3/05/2010 09:20:00 pm