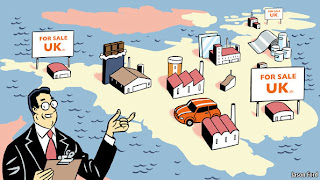 This comprehensive, enormous post from excellent libertarian US economist (my favourite kind), J. Ricardo Valenzuala, on the subject of the vulnaribility of vast swathes of UK corporate assets to foreign takeover, is fascinating and an absolute must-read. In my view, however, and partially in contrast to Valenzuala's, the massive shift over the past decade to the foreign control of British manufacturers - large, medium and small - while certainly providing some temporary benefits in terms of stability and new investment (or, in Rover's case, a stay of execution), overall amounts to no more and no less than a deeply damning indictment of Labour's 13 disastrous years in charge of policy for the UK's manufacturing base, humiliation for the nation, and relegation to economic dependency.

The huge decline in UK manufacturing over the past decade or so simply cannot be hidden, no matter how much Labour's many liars and spinners lie and spin. Even before Brown's bust, his useless policies ensured that the manufacturing sector was either actually shrinking, or that corporations became too weak to defend themselves and stay in British hands, Cadbury being the latest case in point.

History shows that when foreign companies feel the pinch, they do not cut at home, and, if they must, then only as a last resort. They begin abroad. That, to them, means us. Remember Tata Steel and Redcar Corus? No one else seems to. The point is that if and when there is another downturn (though there must remain some uncertainty as to whether we're out of this one yet), Britain will be shockingly exposed because it will be the first country in the firing line for investment cuts by foreign companies. For instance, if Kraft begins to feel the pinch at some point in the fiture, it won't be American factories it will be closing first, it will be British ones. Cadbury, a healthy, profitable, productive and well-managed company, is now vulnerable.

For this reason, we simply must follow the examples of Germany, France and Italy and protect what remains of our homegrown, home-owned manufacturing base from easy foreign takeover. This can be achieved through German-style takeover legislation (remember Vodafone and Mannesman? Vodafone won in the end, but not without one hell of a fight with the German government, who secured enormous, locked-in investment commitments as a consequence, something the current British government has never even bothered to do) wherever such a takeover is deemed to be not in the national interest, the latter measure being transformed into a far sterner test of commitment. This country's highly productive manufacturing workforce deserves nothing less.

Sure, there will be extreme cases where loss-makers can be given a second chance with foreign money, but it's a long-term view for the country as a whole that should shape economic policy in this area from now on, not more of Labour's short-termism, which has always been about the cheap politics of making corporate headaches go away in an election year (ala Rover, 2005) that has doomed far more British industry either to ruin or to second class status than it has ever saved in the long term.

What's therefore crystal clear is that such a paradigm shift, from inept political pragmatism, sold to the British electorate under a false banner of 'globalisation', to an aggressive British enterprise culture which actually creates secure British manufacturing jobs, can't happen under Gordon Brown, but might happen under David Cameron. And that's the chance we can't afford not to take.