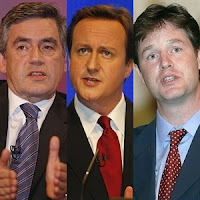 Brown has finally conceded that he can't avoid it any more and, so we hear, is to ask for a dissolution of this nightmare parliament tomorrow.

The end of the worst government - Brown's government - in this nation's history is almost here, folks. Wonderful.

But expect the filthiest general election campaign of all time. Brown, Balls, Mandelson and the rest of the Labour spin machine will guarantee that. It's all those corrupt, pocket-lining, nation-wrecking liars know, afer all. They will not go quietly. Fair enough. Let them trash their own reputations, for what they're worth, out of their own mouths.

Meanwhile, forget dodgy, dubiously 'weighted' polls, I still think the Tories are going to annihilate them, and bring the hideous, unelected Brown edifice come crashing down around their ears, which is more than they deserve.

It is without question time for change. It's time for the Tories to come in once more and clear up the rubble of another devastating Labour government. The opportunity to give these arrogant destroyers the royal kicking they deserve has been a long time coming. I can hardly wait.