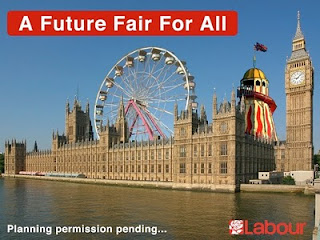 The Spectator's Peter Hoskin makes some pretty telling points about Brown's hopeless manifesto launch this morning. His summary of it is fun:

"You got that, Britain? We. Are. The. Future. Future, future, future. The Tories are the past. We are the Future. The future that is fair for all. We are that future. For all."
And so, more or less, went Gordon Brown's pitch to the nation at Labour's manifesto launch. Except it lasted a good hour and a quarter.

I have looked it up now and can only agree. A longer list of manifest nonsense and partisan claptrap I have yet to hear, even from Brown. He surpassed even his own ability to use thousands of words to say precisely nothing about real, firm policy commitments while simultaneously spraying his own brand of irrational, bilious hatred of all things "Tory" (at least what he imagines to be Tory) copiously and everywhere.
So putting the hate-speak to one side for a moment, what's left? Hoskin again:

But the biggest problem for Labour, to my mind, is the absence of a flagship policy. The one which seemed to stand out today, in Brown's speech and in the Q&A session afterwards, was the cancer guarantee – but, even if you're persuaded by that, I'd be surprised if Labour see it as the central plank on which they are standing. But what is? The fear for Team Brown is that there's nothing beneath his feet but thin air.

Quite right. Nothing is coming out of his mouth except hot air. Labour's not only ruined the country (again), it's run out even of bad ideas (of which it used to have a seemingly inexhaustible supply).
This hopeless Labour document, complete with hackneyed sunrise image on its front cover (which Guido has already shown was totally unoriginal) will be forgotten by sunset, if not before. The Conservative manifesto, by contrast, I expect will be full of surprises and fresh ideas for setting the nation back on the right road - and providing it with a genuine future. You know, one that's sustainable - in that it won't cost us £500 million a day and rising in borrowed money just to stand still, leaving our children and grandchildren with a multi-trillion pound nightmare debt to repay before they've even begun life.
That's Brown's future. And the only thing "fair" about it is that we'll all still be in his shitstorm together.
"Time for change?" Not half.
Posted by Jon Lishman at 4/12/2010 01:33:00 pm