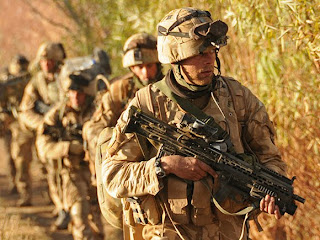 General Sir Richard Dannatt, whom the Labour party attempted to smear not that long ago just because he disagreed with them, has written a piece for tomorrow's Sunday Telegraph that resonates. In it, not only does he show us (diplomatically) what's gone so horribly wrong with defence and foreign policy management under Labour, he reminds us why nailing your colours to a particular mast is so vital when a general election comes around. This last part of his wise words is especially telling:

...what if the electorate were to decide that, with the political class discredited through their abuse of their own remuneration system, they will not vote at all, or will use that vote to punish all and sundry? What message would that send to our young people on the front line in Afghanistan risking life and limb for our security? It says: we actually quite like the idea of those votes that are cast producing no clear answer – but meanwhile, you go on risking your all so we can sit at home doing nothing and deciding nothing. Frankly, we owe it to ourselves and to our servicemen and women to do better.

Here here. It seems to me that General Dannatt also suggests a point that, while wrongly perceived these days as somehow old-fashioned, is nevertheless more significant now than it's ever been: a vote is a precious thing, and to use it when the time comes isn't just a right, it's a duty. And you must vote according to what you believe is in the best interests of your country, and not according to some kind of inherited political prejudice and certainly not because you think you're 'angry with the system'.

If you have any doubts, (and I no longer do), about the party to which you should lend your vote, then you should be aware that the party that best fits Dannatt's criteria for honest, patriotic voting is, currently, the Conservative Party. And this is no time for a hung parliament.

Right, having uttered all that well-intentioned claptrap, I would however like to add that wherever you are, in this real world, any chance that you get to kick Labour as hard as you can, take it. They deserve to be annihilated and, after all, ultimately that's what voting's really for. I admire and aspire to high-minded democratic principles and all that as much as the next knighted general. But, for our nation today, we all must vote and, if necessary, vote dirty. First to get rid of Brown, second to install a strong government. You can't do that by voting Lib Dem, Libertarian or UKIP. That's just true.

And even if, on the face of it, his standards seem unreachably high, I think that between the lines, that's precisely what Dannatt is saying.