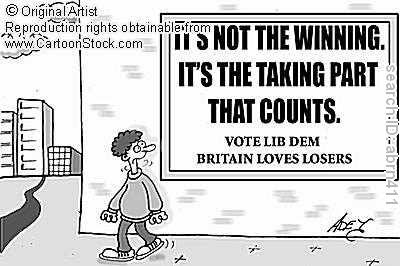 I have to admit it, and I don't like having to do it, but I've been blindsided by the anti-politics surge the Libdums have enjoyed. I didn't see it coming and it caught me by surprise. But I can't just dismiss it as a freak - it's too significant, too important to write off as a mere coincidence and too ominous for the Conservative-minded, like me, to ignore. What's more, if I'm being honest (for a change), Cameron was surprisingly disappointing in that debate thing, and he shows no signs of recovering his momentum - yet. (I reckon he will, though.)

So what's the problem? Well, it ain't the Libdums. They're still a pack of political mongrels as far as I'm concerned and, in that, about as appealing as Monster Raving Loonies. Mind you, at least the Loonies know they're nutters and do it for the fun. They know who they are, the Libdums don't.

On the one hand, the Libdums (especially their ex-Labourist grandees, like that grammar school destroying, arrogant bitch Shirley Williams) are a party of the Left, who believe that stealing people's money can always be justified because society (which they confuse with 'body politic', as all socialists do) always comes first, and taxation is the means by which society's 'behaviour' can be 'modified' (they really use those terms - them and the BNP. Sinister, ain't it?).

On the other hand, they are what Margaret Thatcher might regard as Tory ultra-wets, or, in less colourful terms, old-style 'radicals' (in the revolutionary American sense), but who believe in the post-war consensus, managed decline, the intrinsic desirability of European transnationalism, country-not-court and beard growth. Believe me, electoral reform comes last on their list of priorities, whatever they say to the contrary, especially if they annihilate Labour in the general election - which always should have been their aim in the first place (duh!). Count the younger members of that party among the 'radical' number, including the leader, Vince Clegg (whatever).

In other words, it's a bizarre pushmepullyou party of Heathites and Bennites, of bleeding heart, self-banished, auto-flagellating young Tories and superannuated, pseudo-intellectual, old Labour defectors whose pomposity is ony trumped by their vanity.

The problem is not the Libdums. They'll take care of themselves, eventually. The problem is the amount of damage their antipolitics surge is going to do to the outcome of this general election in that there is a distinct possibility that Cameron is dead right - vote Libdum and get Crash Gordon. The only consensus I can discern in Britain at the moment, not only from reading the internet tealeaves, but from every one of my friends, acquaintances and colleagues, is that five more years of Brown would be an intolerable imposition on a country that never wanted him, never voted for him and never liked him. A split vote letting him in would be a total catastrophe, after the damage he's already inflicted on it, for a nation that is just about getting through the year in tact, and is seriously worried about the next few.

It's not just me that's been blindsided by this Liberal surge, though, it looks to me like the country has, too, especially the people seriously entertaining the notion that the way to punish politicians is by voting for the underdogs, thus letting the worst offenders of all of them back into power. Confused? I am. And so are, I imagine, the Tories.

However, and this is a big rider, if this really is one of those earthquake moments in British politics; if Labour are about to be (rightly) smashed down to third-party status by the Liberals, after their 90 long years in the wilderness, then so be it. It's an outcome I suppose I can live with, as long as Brown is gone and Labour do receive the massive kicking at the polls that they so richly deserve. (It's already happening in a slightly different way in my town, where Plaid look like they almost certainly will oust the sitting Labourist MP for the first time in the town's history ever.)

Guido Fawkes has kindly provided us with a thought experiment illustrating how this "Change Coalition" narrative might flow. It's well worth the read. Personally, I don't think a government like that would last six weeks. The Libdums' severe internal ideological contradictions would destablise everything within days. But, nevertheless, it does sort of look like a grownup solution that would satisfy apparently shifting public political appetites - and it would tick my top two boxes, too:
1) No more Brown
2) Labour crushed

It seems that some clouds might have two silver linings.

It all depends on Clegg, though. But I don't think he can be trusted because I don't think he's got much authority over the party we are supposed to believe he leads for the reasons I've already given.

So, ultimately, as far as I'm concerned, it's business as usual for us Conservatives, despite the blindsiding: Cameron has got to come out fighting and go in for the big win.