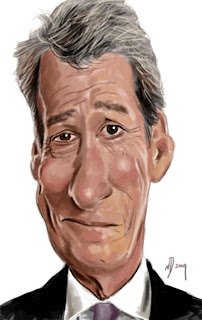 Just watched the interview that I had hoped would be the clincher that finally ended the Brown nightmare once and for all.

Initially, I was encouraged by Paxman's enthusiasm in pursuing Brown on his lies about, well, just about everything, and his terrible record everywhere. Then, after Brown did his usual trick of attacking the interviewer for not asking him the right questions, I really thought Paxman would lose it and go for the jugular. You know, a Howard moment, which he could have done with a question like "You say you take responsibility for the things you think you are responsible for. Name them." Something like that, or better (he was in a massively target rich environment about ten minutes in). But he didn't - and I was pretty unimpressed.

Then, once the whole, sorry spectacle of wriggling, delusion, desperate, hate-filled divisiveness and contemptuous revisionism was over, I realised what Paxman had really done. In fact he hadn't suddenly decided half way through, for some perverse personal, politically motivated reason, to go easy on Brown. He'd done precisely what everyone else has done when it comes to this useless, troubled man, including the editors of the Guardian (laughably).

He'd just given up.

And that was more damning than a hundred Howard moments, and it sealed Brown's fate in just the way I had hoped - finally and permanently - but not quite in the way I'd imagined.