Tax On Jobs and Cuts In Waste 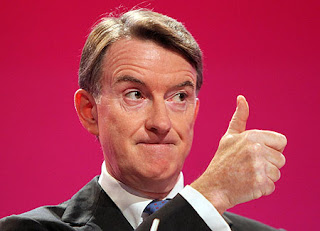 It's incredible, really, how fast the political currents can shift when a couple of objectively true concepts suddenly coalesce into slogans. It's extraordinary that within the space of 24 hours, Labour's 1% NICS rise, conceptually a heroically dumb idea even in the worst of economic times, has now become known - and will be known henceforth until doomsday - as a 'tax on jobs', and 'cuts in frontline public services' has shifted, it seems to me as permanently, to 'cuts in government waste'.

If that's not a massive shift in the 'narrative', (if you like postmodernist critiques of this sort of thing), then I'm a stinking socialist!

Cameron and Osborne have been absolutely dead right on the mad Labour NICS policy since Budget Day (I wonder what Kenneth Clarke's part was in all this), but the real consequences of being right in this case (they've been right a lot of times before, but to little or no political avail) is not merely that they've won the argument hands down, they've changed the very terms of the debate, and there is nothing, but nothing, that the Labour Party media machine can do about it. They've been linguistically neutered. For good. (At last!)

There is now, in everyone's minds, judging by the late night media coverage of the papers, a very clear, articulated, choice between Labour and the Conservatives, between Brown and Cameron: Labour offer nothing more than a tax on jobs and more waste; the Tories will deliver no tax on jobs and they will cut government waste.

If you find this hard to believe (and you shouldn't, because it true!), then read this Andrew Porter piece for this morning's Telegraph. Brown is now under pressure to kill Labour's National Insurance hike! Business groups, representing 10 million workers, have praised the Tory plan and say they will 'fight' for it to happen.

This is a tectonic shift in the mood of the nation, and the fortunes of the two main parties. I think it started with the hubristic vanity of Mandelson when, off the leash as always and carried away by a sense of his own superiority - as always - during Labour's desperate damage control operation this morning (that went well, lol), he effectively branded a lot of high-powered employers "a bunch of mugs who should know better". They should listen to him, he implied, because he knows best, according to his own estimation of himself.

Massive, massive mistake. And it will cost Labour the election, and then some. Big day, then, for everyone.

Update:
Iain Martin thinks it was all part of a carefully choreographed Tory sting operation. I'm not so sure. I think this was, in addition to the media planning, a genuine, momentous outing of the truth, and therefore massively more significant in terms of historic political outcomes. No one could have planned an operation as successful as this one. He's underestimated the terrible impact of the Mandelson intervention, in my 'umble.
Posted by Jon Lishman at 4/02/2010 12:14:00 am