Why A Hung Parliament Would Be Bad, Part 74 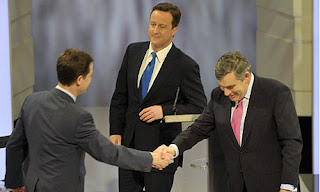 A truly excellent, but entirely unnerving, article by retired senior civil servant and Labour Party member, Brian Barder, on the subject of the new procedures drawn up by the Cabinet Secretary, or "rule book", appeared on his blog a couple of days ago, and has just popped up on LabourLost.org. It's a long, comprehensive piece that discusses not only the post-war history of this, as he calls it rather refreshingly, "anomolous" outcome, but also explores several possible what-if scenarios in the event of its happening again, and how the new rules will work.

Simply put, if you are a Conservative supporter, the results would all be bad. The likelihood of Brown resigning as Prime Minister after the election are minimal, even if his party is second biggest in the House of Commons. In attempting to create "stability", these new codifications of previously unwritten constitutional practices have in my opinion severely skewed the system in favour of the incumbent. Simply put, if my understanding of the piece is correct, should a hung parliament of one form or another be the outcome in which Nick Clegg held the balance of power, there would be no legal or even moral obligation for Brown to resign, so Clegg would be forced to bring down the Labour government by refusing to endorse the Queen's Speech. This would trigger another general election which, you have to think, would hardly be in the Liberal Democrat's best interest. The chances are, therefore, that Clegg would do a deal with Brown and Brown would continue as Prime Minister for the time being, despite having a smaller share of the vote than the Conservative Party. As Mr Barder says:

Thus the logic of the situation may virtually force Clegg to accept any offer from Brown either to join a Labour-LibDem coalition, with a few seats in the coalition Cabinet for Clegg, Cable and one or two others, giving them considerable influence on government policy, but with an inescapable obligation to support some Labour-inspired policies that the LibDems would prefer to oppose; or alternatively to give a conditional promise not to vote against the (Labour) Queen’s Speech or against the Labour government in a vote of confidence provided that certain basic conditions were met by Brown. If that happened, there would be no opening for Cameron to be invited to try to form a government since the Brown government would continue in office without interruption. Of course this would mean the LibDems facing a storm of bitter invective for having kept an unpopular Brown administration in office despite Labour having ‘lost’ the election. But the alternative — ejecting a broadly like-minded centre-left government from office and installing a potentially far-right Tory government in its place — might be even more unpalatable for grass-roots LibDem members and supporters.

Of course, this is all moot, (and the description of the Tory Party as "far right" is ridiculous), but the point is, and Barder goes to some lengths to emphasise it, it is a very real possiblity if current polls are to be believed. The chances of Guido's "Change Coalition" ever happening, even it was desirable (which it absolutely isn't), are tiny, because the new written rules just won't allow it. The system, accidentally or otherwise, has been rigged.

My own view is that the polls are wrong and none of this will happen because there won't be a hung parliament. However, if it did happen the consequences for the country would be terrible. We would be in uncharted territory with a storm front of popular unrest and economic disruption on the near horizon (and that's the only message the Tories need send to the electorate on the subject, too).

I'm watching Sky News just now and they are speculating on this very issue, with that most dishonest of privileged socialists, Polly Toynbee, spinning this madly as some sort of political panacea. Tim Montgomerie, by contrast, has countered with the best set of arguments against this disastrous arrangement I've heard from a Tory yet. He says, in summary, that a new government and a fresh start can only be achieved one way, by voting Conservative.

However, what's now clear, at least to me, is that the Labour Party generally, and Brown in particular, think they have found a way out of their appalling political pickle and a way to cling on to power. What is more, it's also now clear beyond any shadow of a doubt, a vote for the Liberal Democrats is a vote for Gordon Brown. It's also a vote for PR, a permanent centre-left, vague, ineffectual, corrupt "progressive" coalition, with full EU integration and the Euro coming close on its heals. That would be the price of a LibDems/Labour stitch-up, with five more years of Gordon Brown into the bargain just to complete the hideous, Goya-esque image. It is terrifying.

If you need any further evidence for why a hung parliament would be a very, very bad thing in every way conceivable, then you must be a Lib Dem or a Labourist, in which case you should take a long, hard look in the mirror and wonder whether something as immoral as this is a price worth paying for power. If you think it is, then you're already a lost cause.