Bradshaw Threatens Self With Prison 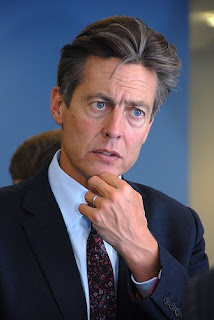 Bradshaw: "I fully deserve to be banged-up"
My ears did not deceive me last night. The newspapers carried the opening Question Time bombshell for MPs of all stripe, heal and party. William Hague did say it: "when asked if some MPs should face criminal prosecution, Mr Hague answered: 'In all probability yes'", according to the Daily Trottergraph in the last hour or so. So it seems they really are steeling themselves for a potential knock on the door from DCI Knacker of the SFO.

None more so than silver-tongued twister, Ben Bradshaw, he who argued in nauseous circles last night (once he'd clocked the hostile mood of the audience) that the outgoing Speaker should get his peerage while advocating a fully elected Upper House in the same breath, and also admitted that

...any members shown to have broken the law should "face up to the consequences" of their fraudulent claims. "Some may go to jail."

So, as the DT shouts in its headline, a Government minister has raised the spectre of MPs being sent to prison for abusing the expenses system. Curious, that, given that Bradshaw's full expenses claim for mortgage interest on a flat jointly owned by him and his civil partner has attracted criticism from several quarters, not least from Pink News who say:

"Although the mortgage is in their joint names, since their civil partnership Mr Bradshaw has paid the full bill." Obviously, it suits Mr Bradshaw and his partner financially for the whole cost of the interest on the mortgage to be paid by the tax payer...

So who is Bradshaw referring to when he says some might be heading for jail? Why, one can only assume he means himself. How very big of him.

A former senior assistant director of the Serious Fraud Office has said he is "sure" that the Met Police will pursue a full investigation into the expenses abuses, with some MPs facing jail terms if convicted.

"It doesn’t seem to me that it should be for individual citizens to try and investigate and bring prosecutions. It seems to me to cry out for a proper police investigation and if the evidence is there for public prosecutions,” Chris Dickson told ITV1’s Tonight programme, to be broadcast this evening.

Tune in tonight, folks. Could be interesting.