"No Election Because I'll Lose" 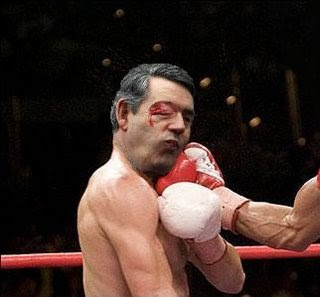 Another Day, Another Pasting
Difficult to imagine a more pathetic admission from Britain's worst ever Prime Minister in today's PMQs (which I've just seen). He's blocking the General Election because he thinks he's going to lose. Plenty of bloggers have touched on the 'chaos' gaffe - as in, Brown associates elections with chaos because he's really an autocrat (and basically mad) - and hats off to them. They're right.

But the implications of this could potentially be pretty severe for democracy in Britain as a whole in that we now have a man 'in office but not in power' who is terrified of elections, is unwanted, has presided over the worst economic and now constitutional crises for generations but because of his visceral tribalism, spinelessness and unnatural egoism, will not go to the country. Generally the consequences of an impasse of this nature is unrest. Bring it on!

The Telegraph published the story about an hour ago:

The Prime Minister said that he would not call an early general election because a Tory administration would bring "chaos" to the country - a clear implication that he believes Labour will not cling on to power.

The slip was met with cheers from opposition MPs at Prime Minister's Questions, with Mr Cameron hailing it as Mr Brown's "first admission" that he was heading for defeat.

The Tory leader went on to say said that an unelected prime minister like Mr Brown was in no position to lead the country through the current political crisis.

He said that the promises the Prime Minister made when he came to power in 2007 had been broken and that Labour had no mandate to govern.

"Can't you see how badly we need a fresh start. Two years ago you promised us a fresh start. Remember what you said outside Downing Street: a Government of integrity and decency. Well that died with Damian McBride," he said.

"You promise to renew trust in Parliament. Where's that promise today?. You promised prudence, economic stability, a big house building programme. None of these things are happening."

"We have got to give the public their voice and the country a chance for a fresh start," he added. "The Prime Minister calls elections chaos. I call them change. Why can't we have one?

This is simply phase two of the violent tempest thundering over Westminster as the will of the people collides with the concrete blockhead that is Brown. There can only be one winner in that crash. Us.
Posted by Jon Lishman at 5/20/2009 05:17:00 pm