It's the (Lack of) Authority, Stupid 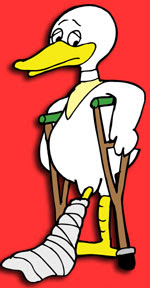 Lame Duck: More Authority than Brown
Just dropped in to catch-up with all the latest news and gossip - and, of course, to have a look at PMQs. There's a word that keeps cropping-up everywhere: Authority. Apparently, Cameron's gaining it, even Clegg's gaining but Brown, ah Brown - he's completely lost it.

This great piece from Andrew Neil this morning sums things up nicely. Here's the most telling bit:

The post-June elections reshuffle is being billed as the last before the general election. Disloyal and ineffective ministers will be cleared out as Mr Brown settles for the team that he will take into the 2010 election. I'd take all this with a cellar of salt. Mr Brown no longer has the authority to preside over a clearout -- and if he attempted a large-scale one after a June election rout he could easily precipitate a wider rebellion over the summer that really would threaten his leadership.

The PM has enough enemies on the backbenches -- many MPs who've given up hope of winning their seats under him -- and hardly needs more. He also has some friends he could do without, such as John Prescott, the nation's official "bull-in-a-china-shop".


Damned if he does, damned if he doesn't. The upshot of all this, and as Neil's analysis implies, is that Brown no longer has any control over his own destiny. The idea that he can run the country is laughable, even if you are one of those strange folk that once thought he could. I'm fairly certain Cameron, who is actually pretty shrewd when it comes to triangulating the position of the public mood, knows that the perception of Brown is that he is fatally weakened - hence the line of assault on him (which was brutal and effective, by the way) in PM's questions.

No, Brown is Brown, unique in history as the most tactless, inept, over-promoted car crash of a Prime Minister ever to have taken (literally in Brown's case) office. And he's been found out everywhere.

So what are the next cataclysmic cock-ups to look out for? Well, there is the Royal Mail rebellion which is gathering pace and represents a new front opening against Brown on his Left flank. As the Spectator points out, there is a distinct possibility that Cameron, on whom Brown is relying to carry the day, might decide that this the moment to pull the plug on him (an extraordinary state of affairs which puts the fragility Brown's authority firmly in perspective). But the Speccy also says that Brown might just climbdown altogether, with concessions to the Left, in order to avoid another House of Commons defeat. Whichever outcome emerges, though - win but with Tory support, loss after a major rebellion, or concessions and no vote - one thing is crystal clear: Brown's authority is gone.

The next stress test on the horizon is, of course, the local and Euro elections. Suffice to say I've consistently been of the opinion that after total annihilation in those, Labour will 'do the math' and simply decide that they'd be better off without Brown. Anyone, but anyone would have more control over the party than this lamest of lame ducks, they will think. Anyone, but anyone (even Harriet Harperson) would connect more effectively with a public now convinced that Brown is just weird. Anyone, but anyone would command more authority (it's impossible to go below zero, you see) in the party and the country than Brown. And anyone, but anyone would inspire an improvement in a polling trend (as revealed by that most excellent bookie, Mike Smithson) that now suggests Labour are heading for total wipeout in the next general election.