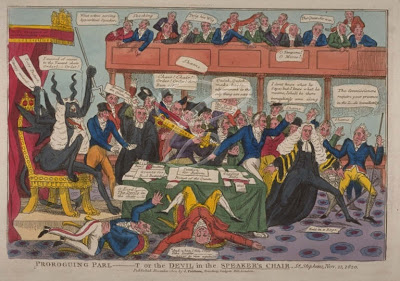 The first Labour placeman will be gone before the day's out. Bets are being taken on who'll replace him with Frank Field the front runner. I think odds should be offered on who's next to go, not just on who will be the next speaker.

Dizzy speculates this is part of a Brown purge. I'm not convinced the feeble ditherer is in control of or strong enough in his party to that extent. My view: Cameron is in charge of the agenda. He was able to sit back and let Brown kill off one of his own allies without getting blood on his hands. But if Brown had not acted, Cameron would have, thus making Brown look even weaker. Either way, Brown has been severely - probably terminally - damaged by today's events.

Conclusion: this government is about to fall, folks. There will be an election this year. They should be taking bets on the date.
Posted by Jon Lishman at 5/19/2009 01:21:00 pm