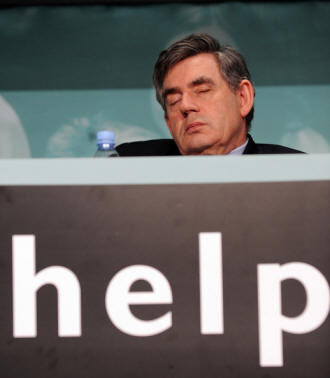 The Spectator live blogged it, I watched it. I could not believe what I was hearing. As the Speccy says, this was Gordo's 'me' moment - and it was a huge pack of inadequate dishonest, wriggling partisan claptrap and lame posturing from a lame duck premier. 'Floundering' is not a strong enough work for it. Here's the lowest of the low points (mostly from the Spec with a few notes):

1. He called for "immediate action" - which kinda contradicts his "wait for the Kelly Review" stance of last week.

2. Brown really struggled to make it seem like he's taken the lead on expenses. He says that he's "really pleased" that his "proposal" for more independent scrutiny has been met with "broad agreement" from the other party leaders. It's horse poo, too. These were Tory proposals made last week.

3. The key problem with Brown's approach: he says that Hazel Blears hasn't "broken the rules of the House of Commons". I think it's safe to say that those rules have been discredited by now. And his submission for quote of the week: "Hazel Blears' actions were unacceptable, and she's accepted that". Priceless. And er, Gord old boy, doesn't that mean she has to resign?

4. "It was me who put forward proposals before the Daily Telegraph articles were published; it was me who proposed a new system for expenses ...." As lies go, this one's a doozy.

5. Brown, when asked whether he'd pay any of his expenses back: "I believe that I've done the right thing." No, what he's done is 'nothing'.

6. He said that the public will appreciate him "putting party politics to one side". So it's all the Tory's fault, then. Attack, attack!

7. "You're making this an issue of government, when it's an issue of Parliament." In other words, the Muck Martin line: nothing to do with me. It's the system. Wrong, Gord, the system works fine as long as honest people are operating in it. In fact, it's a bloody good system in that it sorts out the honest and the dignified from the troughers, thieves, cheats and liars. Keep the system, change the personnel!

8. More "me, me, me" from Brown. He says that "Prime Ministers haven't tradtionally involved themselves in [the expenses system] ... I'm the first to put proposals directly to the House of Commons." Er, not true. What is true is that you caused Cameron and Clegg to walk out because you were so rude and then published a weird, unilateralist video on YouTube which spectacularly backfired.

So, a car crash, a train wreck of a press conference and one which has simply raised more issues about, and created more contradictions in, Brown's on-the-hoof, pisspoor approach. All that really emerged with any clarity from this is that he remains utterly, existentially terrified of the 'E' word. So shout it out as often as you can: ELECTION!