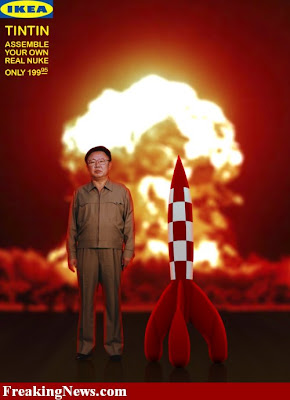 Now that North Korea has done exactly what it threatened to do and relaunched its nuclear programme by successfully testing a 20kt nuclear device, it's time for the UN's bureaucrats with their cushy New York City lifestyles to ask themselves some searching questions. Here's some suggestions.

1) Diplomatic failure. How can we galvanise more equivocal nations like China and Russia into putting concerted pressure on NK to disarm immediately or face wide-ranging sanctions and expulsion from the UN? This approach appeared to be working when Bush was around, banging-on about the 'Axis of Evil', so what's changed? Which states have flouted international law by continuing to supply nuclear weapon and missile technology to NK (Iran, Russia, China) and what should be done about them?

2) Doctrine. If NK decides to 'abolish' a city, like Seoul, as a precursor to an invasion, what will the world's response be? Will we carry out President Clniton's 1997 threat to 'wipe North Korea off the face of the earth' during a far less severe crisis? Will we really contemplate using thermonuclear weapons against major North Korean population centres in retaliation at a cost of millions of lives? What is our response doctrine for a limited nuclear attack by a rogue state?

4) Aid. What are the implications for the aid programme currently operating in NK? Deadly though it would certainly be for the subjugated population, should the UN's donor states continue to provide succour to a belligerent and now nuclear armed country? Would withdrawal of that aid make matters worse by creating an even deeper, more desperate 'siege mentality'.

This is not merely more bombast from a deeply irrational regime. The reality of a nuclear armed North Korea with a viable delivery system is now here. If the UN fails to find adequate answers to these - and many other - critical questions, the consequences for that region's stability will be dire, with all the attendant, disastrous implications for world peace.

One thing is certain, Iran, among a few others, will be studying the outcomes of this latest international diplomatic fiasco with keen interest. We'd better get it right.